For an easy family adventure Borneo ticks all the right boxes. This Southeast Asian island, the third largest island in the world, is a wonderful destination for kids and parents with dramatic scenery, a stunning coastline, great food and fascinating wildlife.

Of course, the star attraction is the characterful orang-utan, nicknamed the “old man of the forest”. But there are also rhinos and elephants, leopards and fruit bats and much, much more besides. In addition to this rich collection of wildlife, Borneo offers sublime snorkelling and diving, trekking and hiking and the kind of pristine beaches usually only found on the front of postcards. Best of all, Borneo is an easy place to travel with kids. Here’s our list of 10 things you must do when in Borneo with kids

Meet the old men of the forest

The amazing orang-utans are without doubt one of the main reasons families choose Borneo for a family holiday. Known locally as the “old men of the forest” these characterful creatures are simply remarkable. One of the best way to see orang-utans is at the Sepilok Orang-utan Sanctuary. This world-renowned centre rehabilitates orang-utans that have been rescued from captivity or displaced by logging activities. The centre has been working since 1964 to care for orphaned orang-utans and trains them to survive again in the wild.

The sanctuary is located within the Kabili-Sepilok Forest Reserve. This reserve covers an area of 4,294 ha (10,610 acres), much of which is virgin rainforest. A nursery area opened to visitors last year where younger orang-utans first learn to be outside and play. The best time to visit the centre is at 10am and again at 2.30pm. At these hours the primates emerge from the forest for their daily snacks of bananas and milk.

The Borneo rainforest is a mind boggling 140 million years old, making it one of the oldest rainforests on the planet. This incredible habitat is home to some 15,000 species of flowering plants, 3,000 species of trees, over 200 species of mammal and more than 400 species of birds. It’s safe to say, there is a lot to see!

As well as being the natural habitat for the endangered Borneo orang-utan, the rainforest is also home to Asian elephants, the Sumatran rhinoceros and the Bornean clouded leopard. Look closely and you may even spot a Dayak fruit bat, these are endemic to Borneo and are not found anywhere else in the world.

Sleep in a traditional Rungus Longhouse

The Rungus are an ethnic group of Borneo, living mainly in northern Sabah. Traditionally the Rungus live in longhouses, long single story houses made from tough wooden pillars with outward sloping bamboo walls and low bamboo roofs. The houses usually sit some 3 to 5 feet above ground. Families can spend the night in a local village sleeping in one of these traditional houses. The accommodation is very simple but this unique experience is an incredible way for children to gain a great insight into village life in Borneo.

Kinabalu National Park, known as Taman Kinabalu in Malay, was established as a national park in 1964 and is today a UNESCO World Heritage site. The park covers some 754sq km and is home to a rich and varied collection of flora and fauna, animal and bird species. It also hides over 800 species of orchid! Grab your walking shoes and keep your eyes peeled as you follow the botanical trail through the lowland rainforest of the park.

Turtle Island Park lies 40km north of Sandakan in the Sulu Sea and consists of three islands, Selingan, Bakungan Kecil and Gulisan. The park is a safe haven for the endangered green and hawksbill turtles and gives you the unique opportunity to watch these magnificent creatures up close.

Selingan Island is the largest of the three islands and home to the parks’ headquarters, a turtle hatchery and accommodation. Watch after dusk as the mother turtles come ashore to lay their eggs, a truly incredible sight! You may even be able to help release baby turtles back into the ocean. Turtles lay their eggs throughout the year but the best time to visit is between July and October when the sea is calmer.

[Tweet “Take a look at all these fun things to do with #kids in #Borneo! #FamilyTravel”]

Cruise along the Kinabatangan River

One of the most enjoyable way to discover the amazing wildlife and nature of Sabah is to take a river cruise along the 560km Kinabatangan River (although not the entire length of it!). Look out for the odd-looking Proboscis monkeys playing in the trees, macaques, gibbons, crocodiles basking in the mud and even possibly Borneon Pygmy Elephants. For bird-watchers, this area is home to eight of Borneo’s hornbill species as well as the bizarre ‘Snake-Bird’.

Pulau Tiga is one of a group of small, uninhabited islands off the western coast of Sabah and a true tropical idyll. This stunning island is famous for its mud volcanoes and pools. Cover yourself in therapeutic thick mud and see if you feel rejuvenated at the end! It’s also known for being the first ever ‘secret’ location for the reality television series Survivor, hence its nickname, ‘Survivor Island’. The crystal clear waters surrounding Pulau Tiga are perfect for snorkelling, kayaking and scuba diving.

At 4,095 metres, Mount Kinabalu is the highest mountain in South East Asia. The mountain lies roughly two hours inland from Sabah’s northern coastline, its granite peaks rising up from the tropical forest below. The first recorded ascent was in 1854 by the British colonial administrator, Hugh Low (the mountain’s highest point is named after him). These days it’s considered one of the region’s most accessible mountains – some 40,000 people attempt the climb annually.

The ascent is usually split over two days. A six hour trek on day one, followed by a three-hour climb on day two in time to reach the summit for the sunrise. It’s recommended that children be at least 10 years old in order to attempt the climb, although younger have done it!

There are whitewater rafting opportunities galore in Borneo to suit all levels of experience. From the calm waters of a Class 1 river to wet and wild Class 6 rapids, suitable for experts only! Padas River in Sabah offers Class 3 and 4 rapids. Kiulu offers more family-friendly rivers with Class 1 to 2 rapids.

Take a boat to Ox-bow lake, a perfectly shaped crescent in Bilit where villagers make their living fishing. Then watch animals that come to the banks to drink – both pygmy elephants and wild orang-utans are often seen here! The oxbow lake is also a safe place for swimming, thankfully free from estuarine crocodiles.

[Tweet “Take a look at all these fun things to do with #kids in #Borneo! #FamilyTravel”]

10 Things to do with Kids in Bohol, The Philippines

10 Things to do with Kids in Sri Lanka 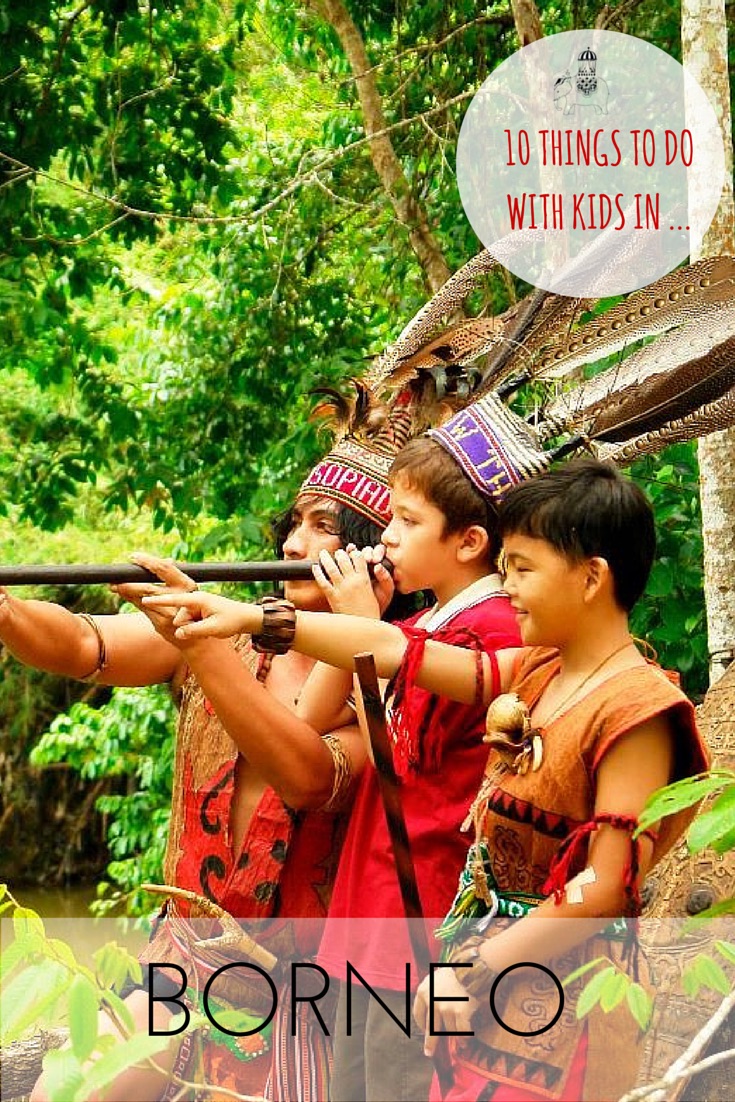 3 thoughts on “10 Things to do with Kids in Borneo”