One of the highlights of our Christmas calendar for the last couple of years (2020 notwithstanding) has been Circus 1903 in London, a magical step back in time to the mesmerising golden age of circus.

The great news is that the show returns to the Southbank Centre this Christmas. Held in the Royal Festival Hall Circus 1903 promises more gravity-defying feats, mind boggling performances and lots of laugh out loud moments. It’s a wonderful show that will transport audiences of all ages to a time when circuses were a major form of popular entertainment.

Having seen Circus 1903 twice now I can safely say that the show follows a similar format each time but with new acts whether that be a high-wire performers t in place of trapeze artists or knife throwers instead of strong men. What you can be sure of, however, is a huge cast of jaw-dropping talent that will have you on the edge of your seat for the duration of the show.

Here’s what to expect when Circus 1903 returns. You can discover more magical things to do in London for Christmas here.

Disclosure: I was given tickets to Circus 1903 for the purpose of this review. All opinions are entirely my own. For more information, please see my disclosure policy.

The show opens with Ringmaster Willy Whipsnade (David Williamson), the undeniable star of the show. A successful comedy magician with multiple tours under his belt, he has an acerbic wit that has the audience belly laughing more than once throughout the show. His comic timing and the willing – but unwitting – participation of various children from the audience mean that the jokes are fresh and funny even if you have hear them before.

You may also enjoy these London posts:

Don’t forget to join our London with Kids Facebook group for more ideas on exploring the city for families.

Circus 1903 features acts from all corners of the globe and while some of the acts listed below may perform this year, it has been confirmed that new acts will also feature. The following review is based on the performances that I saw and will give you a feel for the kind of daredevil entertainment, dangerous stunts and magic of the circus that you can expect.

The first act to appear on stage were The Daring Desafios, a trio of daredevils who catapult themselves sky high on a specifically-engineered type of teeterboard.

They were followed by The Sensational Sozonov, who performs an incredible ‘Rola Bola’ balancing act on a series of what look like giant, silver egg timers. Next on stage was Mademoiselle Natalia who, at one point, was spinning 20 hula hoops simultaneously.

The Flying Fredonis, skilled acrobats from the Ukraine, performed an aerial act that was simply beautiful and The Elastic Dislocationist from Ethiopia contorted her body into remarkable poses that, quite frankly, don’t seem possible.

Willy appears between acts, much like Hugh Jackman did playing the part of P.T. Barnum in the Greatest Showman. He performs magic tricks, selecting audience members to take part in comedy sketches and introducing the next acts. He also shares his love for the circus, reminding us that one of the main joys is watching a remarkable group of people do extraordinary things.

And this is certainly true of Circus 1903; all the performers have dedicated a lifetime to their art, which is often passed down over generations.

And then it’s time for the Circus 1903 elephants.

Fortunately, there are no scary clowns or real elephants in Circus 1903 but what they do have is sensational puppetry from the award-winning team behind ‘War Horse.

The magnificent life-size elephant puppets are beautifully executed and you could hear the audience breathe a collective audible sigh of joy when baby elephant Peanut came ambling onto the stage.

The second half of the show is just as impressive as the first with more jaw dropping and dangerous acts that had the audience on the edge of their seats.

But it’s not all thrills and daredevil entertainment. There were also some acts that were just really, really impressive such as Francois Bore, one of the fastest jugglers in the world.

We also witnessed the the high-flying somersaults and gravity defying leaps of Les Incredibles, and the brilliant – and charismatic – balancing act of Rokardy Rodriguez.

The Remarkable Risleys and the Brazilian Wheel of Death.

The Remarkable Risleys, from Mongolia, performed a sensational acrobatic performance that defied belief. The Brazilian Wheel of Death was the final act of the night and was so hypnotic – as well as jaw dropping and dangerous – that I found myself holding my breath for much of the performance.

Circus 1903 is a dazzling treat from start to finish; old school entertainment that celebrates the thrill of circus performances and the marvel of mankind. It’s entertaining, it’s funny and it really does make you believe that the world – and the people in it – can be quite magical.

Tickets: You can book tickets on the website. Tickets cost between £25 – 115. 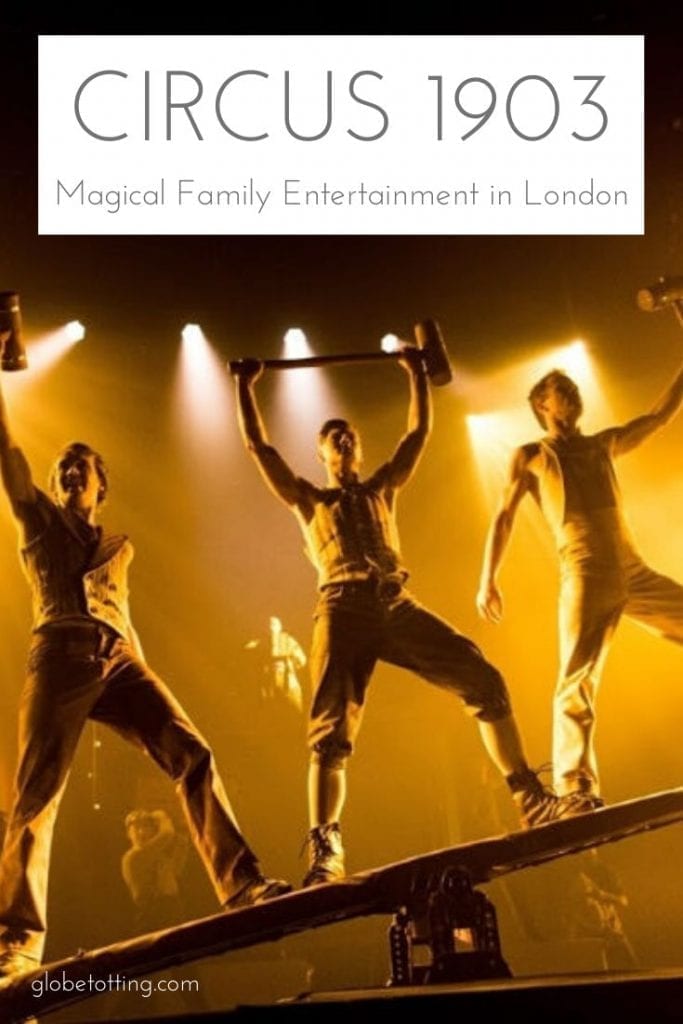