Dimakya Island fulfils the Robinson Crusoe dream while offering a helping of luxury on the side. The island is full of natural wonders to explore from the fruit bat colony to the Hawksbill and Green Sea Turtles who lay their eggs on secret beaches. There are multitudes of different birds on the island, including the elegant night Heron and also the Jurassic looking iguanas that prowl the swamp. However, it’s what lies beneath the waves that is truly magnificent. For dive enthusiasts this is an underwater paradise. For young snorkellers it is the best place to make first time discoveries including big turtles in their natural habitats and stingrays making patterns in the sand. Dimakya Island is located in Palawan province in The Philippines. 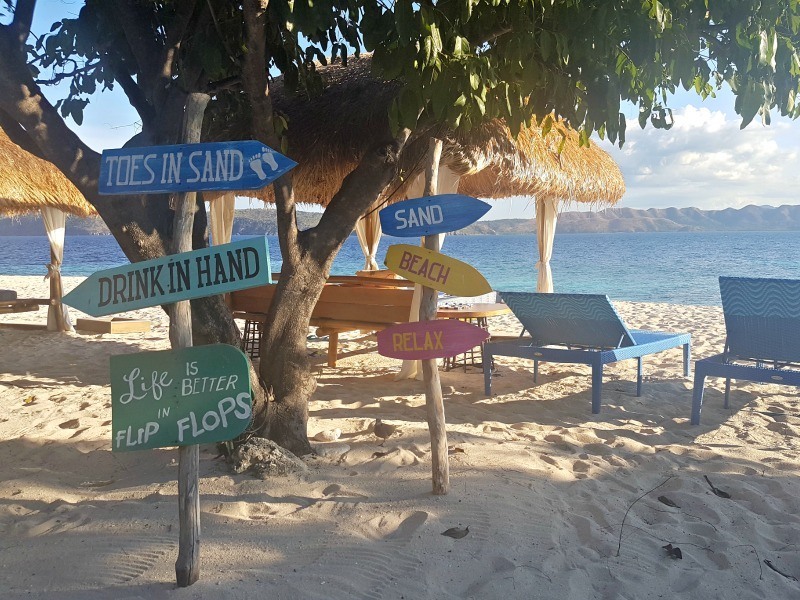 We first came to Dimakya Island four years ago. Since then the pristine turquoise waters and sugary white sand beaches have been so well protected that marine life has swollen in population as more and more fish, turtles, sting rays and critters have moved in. The snorkelling and diving here is exceptional and, with virtually no current, a smooth sandy bottom and perfect coral reef outcrops, it is the ideal place for children to get a taste of the wondrous ocean. It is also an ideal spot to teach children about conservation. Here we can teach our kiddos to love the ocean and reduce our plastic addiction, as we are confronted with the “Plastic or Planet” debate. Apart from the rich marine life, the island is also home to the private Coron Resort.

[Tweet “Discover paradise above and below the water on Dimakya Island! @_ClubParadise #FamilyTravel #TBIN #ThePhilippines”] 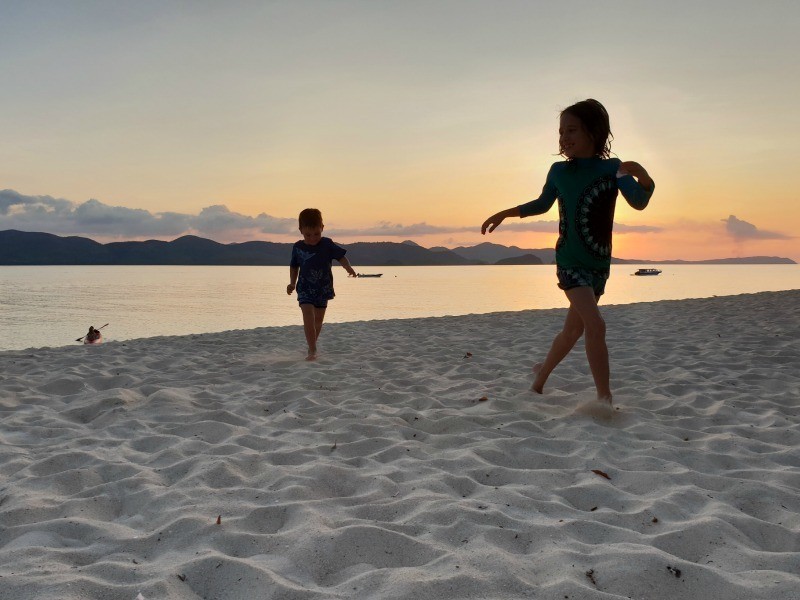 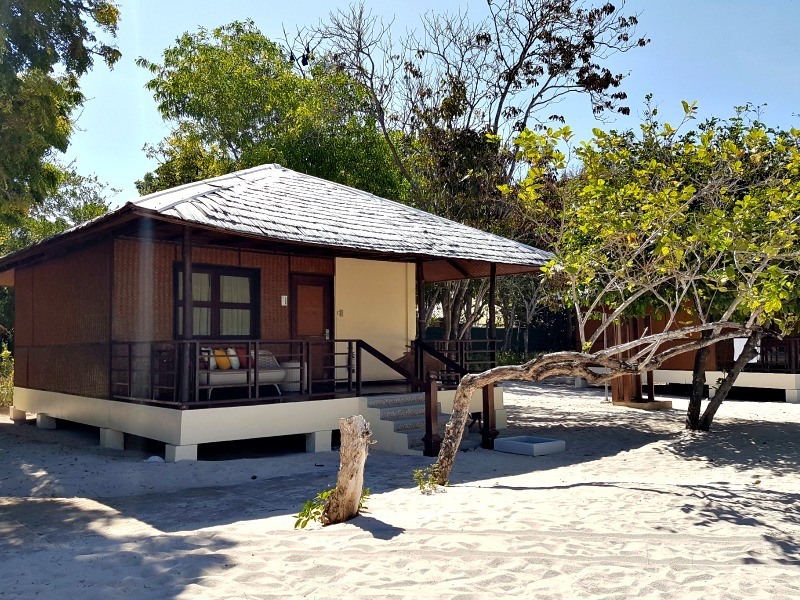 The island is owned by Club Paradise which offers a choice of rooms. The family villas are ideal if you are travelling with kids and the best ones are the Sunset Villas, which are located on Sunset Beach near the main club house and children’s play area. The villa design is sympathetic to the natural landscape and the bungalow format uses a mix of native materials to blend with the island’s charm. Every morning we woke up as the sun rose at our doorstep. The villas have a small terrace where you can lie in a hammock and watch the waves lap on the shore; we felt truly immersed in nature! 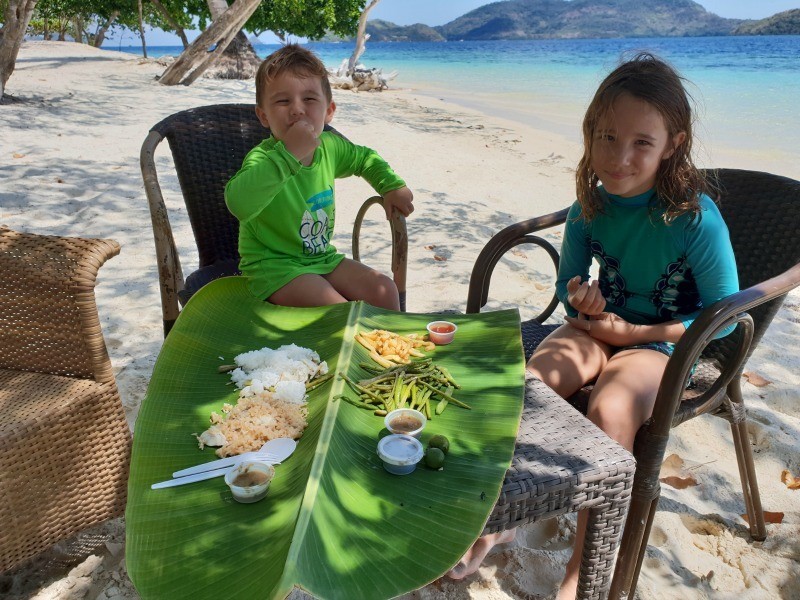 The Club Paradise restaurant offers local and international cuisine, but it is really the Filipino feasts that are the island’s speciality. The island has an organic garden where it grows many of the herbs and vegetables used in the restaurant. Signature local dishes such as chicken and pork Adobo, Tinola (Chicken Soup), Kilawin (raw fish marinated in vinegar), Pancit Canton (noodles), and Lechon Kawali ( Pork Belly and Salted Egg with a sweet sauce) are a great way for those new to Filipino food to enjoy it cooked to perfection.

We love to eat al fresco and were able to organise different picnic experiences during our stay. Since we were staying near to Hidden Beach we asked the restaurant to prepare a lunch for us to eat in this secluded spot which has a couple of cabanas constructed on the rocks by the beach. The waiter dressed the table beautifully before serving us our gourmet feast.

On our last day we took a small boat over to nearby Diatoy Island where we packed a picnic of BBQ fish, soy sauce and calamansi (local citrus fruit), as well as garlic rice. The food was laid out the local way on huge banana leaves. This was a wonderful way to picnic amongst nature on a deserted beach – Robinson Crusoe style!

What to do on Dimakya Island 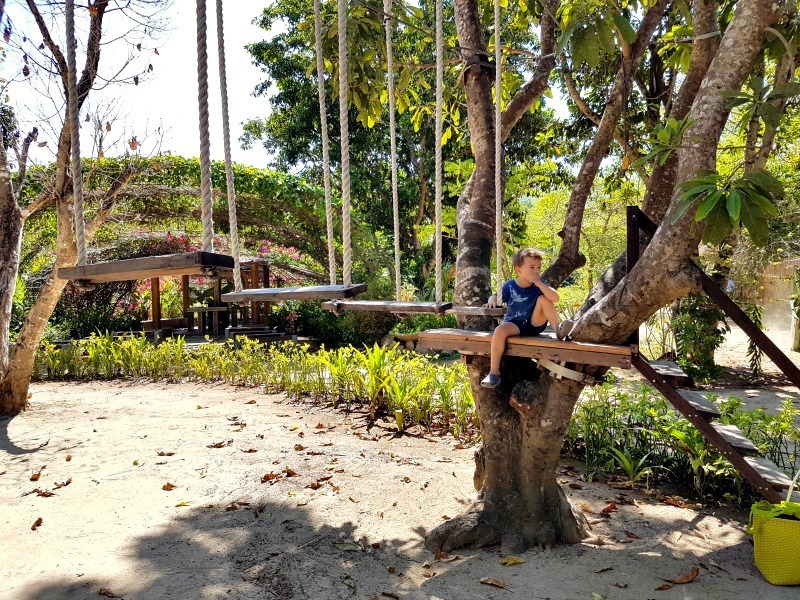 There are so many activities to enjoy on the island from snorkelling, scuba diving, kayaking and hiking to massages, island hopping, snooker, table football and more. Our children spent most mornings up in the treehouse which overlooked the restaurant where we were able to take a leisurely coffee and most afternoons in the Adventure Park when it was cooler. The Adventure Park is a tree top course where both children and adults wear a helmet and harness to navigate their way over the beams, steps and down a zip line. 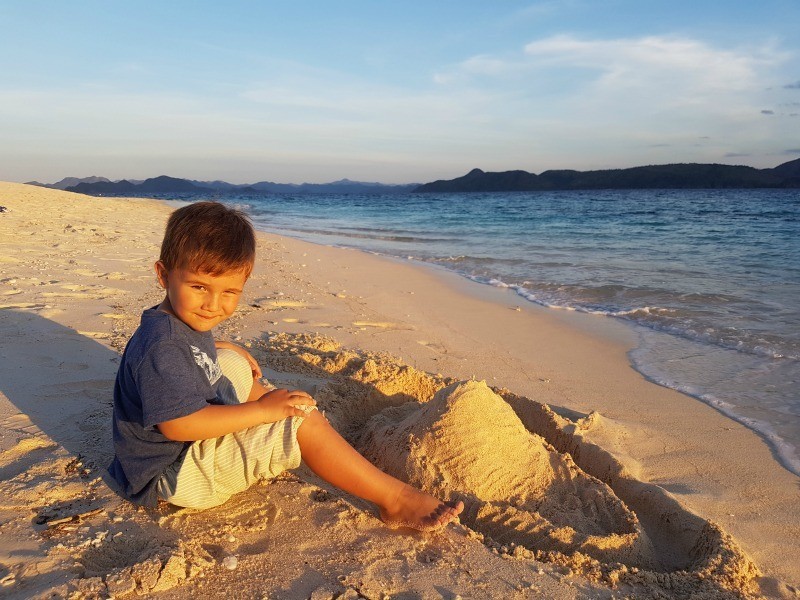 And then there’s the island itself. Dimakya Island is alive with nature both offshore and inland; friendly turtles nibble on sea grass at just 5m deep making them easy for kiddie snorkelers to spot. Every day my daughter and I would venture out just 50m from the shoreline and spot anywhere between one and six turtles at a time. The turtles stay there because they have a safe habitat to graze, which is completely protected. Children are able to spot Stingrays gliding over the sandy bottom leaving their distinctive prints on the ocean floor, while shoals of fish, many varieties of sea slugs, clams, corals and even occasional black tip reef sharks circle the island. The underwater fish activity is as busy as the streets of inner city Manila! 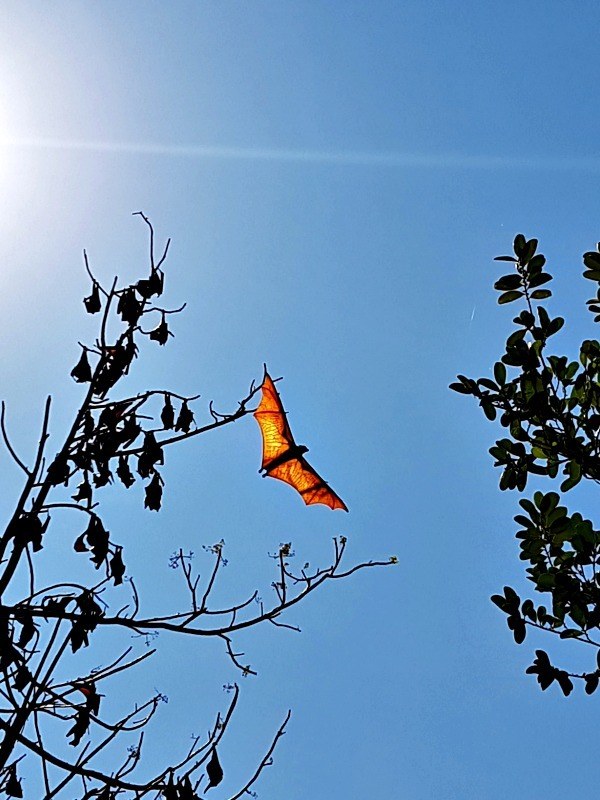 Onshore, the natural world was humming with activity from the friendly Night Heron who visited us at breakfast and dinner, to the growing population of Monitor Lizards (from 1 – 5m long) who were often spotted at the lagoon in the early morning. My three-year-old son adored these Jurassic creatures who resembled the Dinosaurs he so loves. The most striking natural phenomena on the island is the huge colony of Fruit Bats which hang in the trees over the island. At sunset they put on the most magnificent show by swooping over the pool illuminated by the moon. 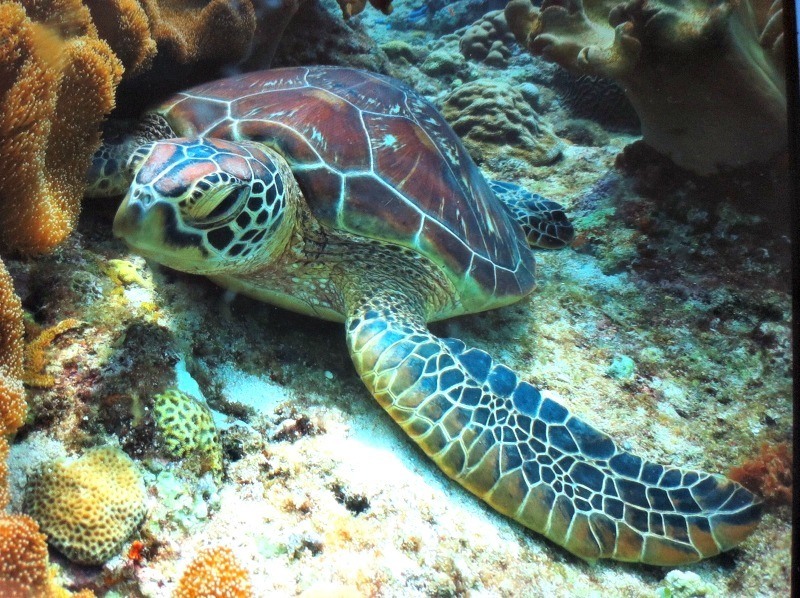 We were lucky to be on the island during the full moon when baby turtles hatch on Secret Beach. One evening, as we were finishing our family meal, we were called over by a security guard to hike over to the Secret Beach and watch the baby turtles hatch from their eggs and make their maiden voyage over the waves into the night. This was a special moment that the whole family could enjoy. The security guards watch the mother turtles lay their eggs and then protect the area with fencing so it is trickier for lizards and birds to eat the eggs. Once the eggs hatch the babies dig their way out of the sand and head towards the light reflecting off the ocean from the moonlight. They are then carried away by the waves and once they are fully grown the adult females will navigate their way back to the same beach to continue the cycle. The children were enchanted as they watched this National Geographic moment come to life! 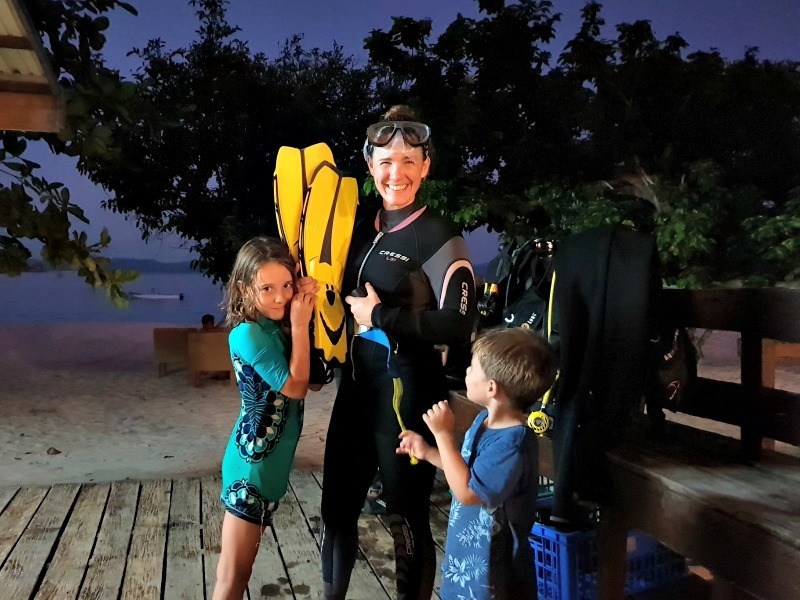 The Philippines has some of the best diving in the world, and Dimakya island is one of my favourite spots to explore what lies beneath. My husband and I took turns to dive, so that one parent could babysit while the other was out with the resident dive instructor. I began with a night dive on the second night of our stay at 7pm after the children had eaten and were ready for bed. My dive instructor “Dutch” had a keen eye and we were lucky to spot baby octopus, several sleeping and night prowling turtles, and giant members of the Discodorididae family of sea slugs (which even Dutch had never seen before). Dutch sought out flashing Electric Clams in psychedelic colours hiding under the rocks, stealth Cuttlefish and camouflaged Leaf Fish. I felt at times he was as excited as me to make these discoveries as we shone our torches around corners expectant for what was nestled in-between the corals. Most importantly I felt I was in safe hands and since the dive was from the shore (which I had spent all day snorkelling), it was not too daunting venturing into a dark ocean. With a sloping bottom contour it was also easy to orientate myself.  By the time we surfaced under a full moon and star speckled sky the kids were tucked up in bed. I love to dive at night since the colours are so much more vivid against at black background and the nocturnal life if wildly different from what goes on during the day.

When to visit Dimakya Island 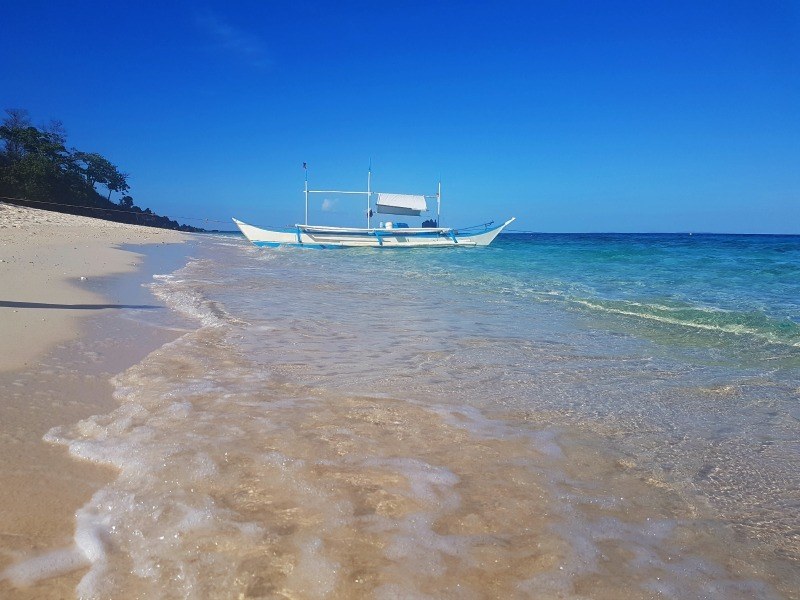 The best time to visit The Philippines is between December and March when it is cooler. However, if you are a keen diver then the summer months of April – June are perfect for swimming deep down in the tropical waters. Although be warned the summer months are boiling hot! The rainy season begins in July and end in November. September through to November is known as Typhoon Season. If you are prepared to take a gamble on the weather you can avail great deals in the rainy and typhoon seasons 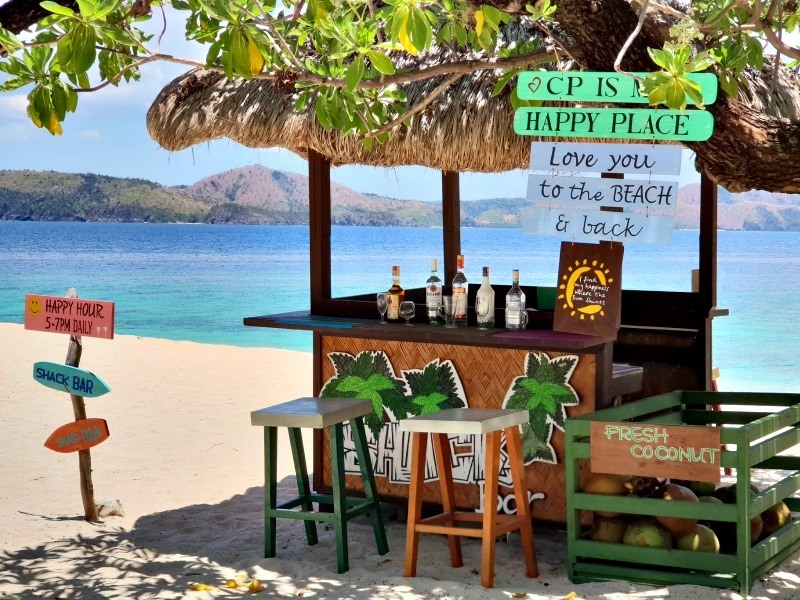 Snorkel: The resort provides fins and snorkels for free anytime of day. Wake up at sunrise and head down to the beach. Before indulging in the breakfast buffet grab a snorkel and mask and spend 30 minutes swimming with the fish. This is a great way to meditate/work-out before the day starts. Remember the longer you are in the water the more you will see.

Dive: If you have your dive qualification make sure you do at least one dive. I am a night dive junkie so would always opt for a starlit session. If you are not qualified you can get qualified at the resort. It only takes three days and will open up a whole new world.

Book a Massage: The Glow Spa is located in the middle of the island and offers traditional Hilot healing massage. The therapists are very well trained and will be sure to sooth any aches away.

How to get to Dimakya Island 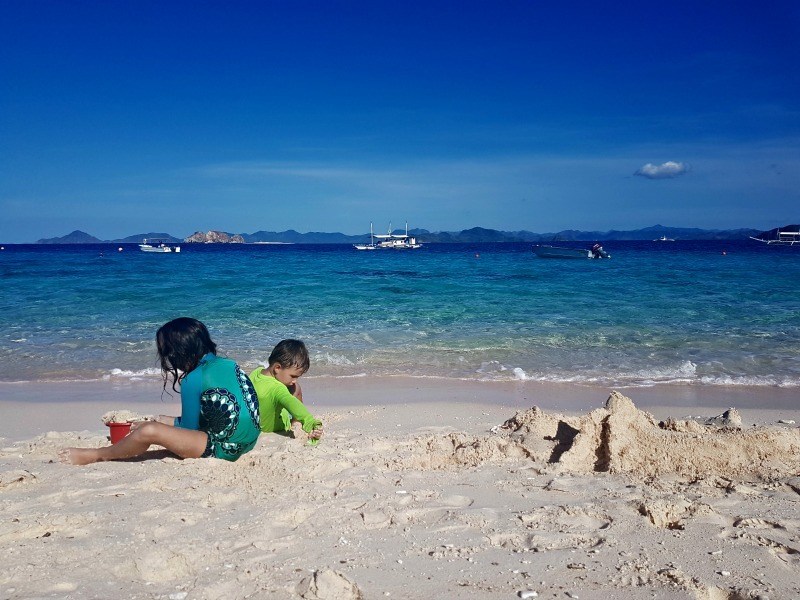 One of the reasons we love this island is it is so easy to get here from Manila. This makes it perfect for a weekend getaway. From Manila book a flight to Busuanga. From Busuanga airport the team at Club paradise we collect you in their van and take you to a small jetty. From the jetty you will ride a speed boat to the island. The flight takes less than an hour, the overland and speed boat crossing takes about an hour as well.

[Tweet “Discover paradise above and below the water on Dimakya Island! @_ClubParadise #FamilyTravel #TBIN #ThePhilippines”]

Family Hotel Review: Have a splashing time at the Astoria Palawan Resort

The Philippines with Kids: 10 Things to do with Kids in Bohol

10 Things to do with Kids on the island of Boracay, The Philippines 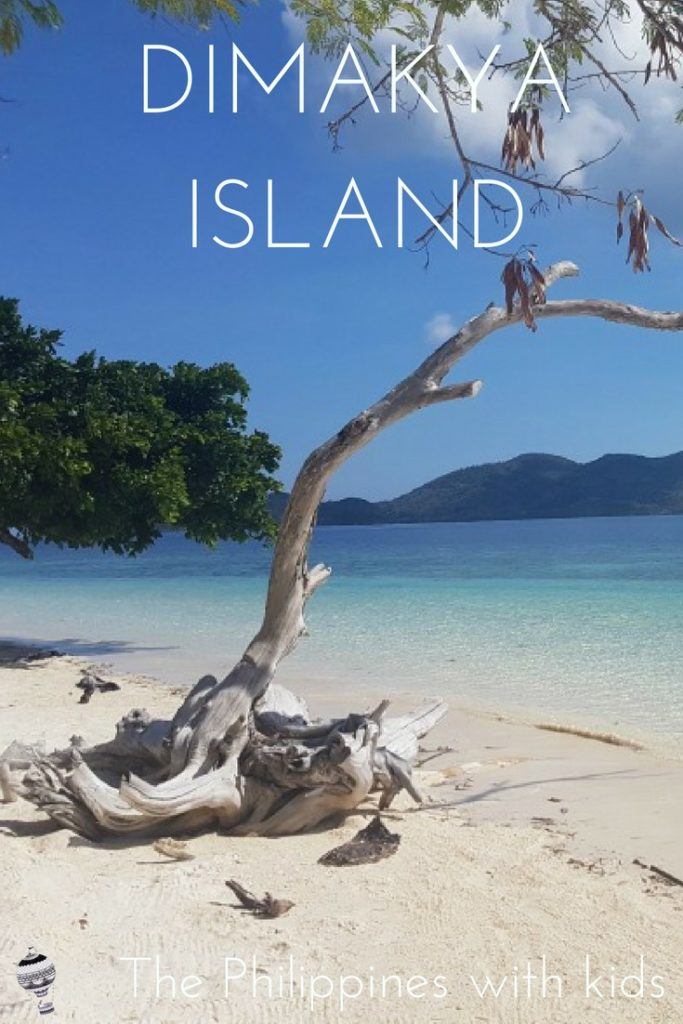 Disclaimer: We received two complimentary nights in a Sunrise Villa.

1 thought on “Everything you need to know about Dimakya Island in Coron, The Philippines”