India might be bright and bold year-round but throw a festival into the mix and it becomes a mass of Technicolor brilliance! There are festivals of light, festivals of colour and festivals marked by the burning of huge effigies. Nearly every festival has a religious significance but there are a handful that are celebrated just because. Here we give you the lowdown on our favourite family-friendly festivals in India. Now you too can party like a Maharajah.

Get Down at the Jodhpur Riff

This fantastic family-friendly festival is a truly unique experience. Originally established in 2007 to revitalise Rajasthan’s music and arts heritage, the Rajasthan International Folk Festival brings together more than 250 musicians and performing artists from across Rajasthan and around the world.

Patrons of the festival include H H Maharaja Gaj Singh II of Marwar-Jodhpur and Sir Mick Jagger. Mick has even been spotted in the crowd in previous years!

The daytime performances are all great for younger children. There’s dancing, singing and demonstrations where kids can try their hand at traditional Indian instruments. A number of children’s activities are also organised including magic shows, traditional puppetry and juggling.

At night the fort is transformed into an after-hours party where you can dance the night away or simply sit back with a drink in hand. Previous highlights have included a bluegrass band from the U.S., Sri Lankan percussionists and a British beat-boxer as well as countless colourful local musicians and performers. The festival is also refreshingly free from crowds.

This year the Jodhpur RIFF will be held 5th – 9th October 2017.  For more details see here.

Nothing can quite prepare you for the sight (or smell!) of the thousands of cattle and camel that take over Pushkar at the start of the annual fair. Traders, farmers and villagers from all over Rajasthan arrive with their cattle, camel and horses.

For the seven days of the festival proper events are held either in the festival grounds or in the animal exhibition grounds. Take part in a tug-of-war, ride a Ferris wheel, and compare your moustache against some of the best in Rajasthan.

For kids, this is a fascinating event. As well as seeing the colourful camels roam the dunes on the outskirts of Pushkar, kids can take rides through the grounds and watch their one-humped friends take part in camel races and even dance competitions. Yes, really!

A lot of the events, such as the turban-tying contests, are held specifically for visitors but this doesn’t make them any less enjoyable and kids in particular will have a ball.

This year the The Pushkar Camel Fair will be held from October 28 – November 4 2017.

Get Colourful at Holi

The Indian festival of Holi heralds the arrival of spring with an explosion of colour. Celebrated by Hindus, Sikhs, Jains and other religions, this vibrant ritual is one of India’s most exciting and fun-filled festivals.

The legend of Holi centres on the female demon Holika and a devout child called Prahlad. The story goes that Holika was ordered to take Prahlad into a raging fire (by his father, no less) but that Lord Vishnu saved the child even while Holika burned. The eve of Holi is now known as Holika and fires are lit around the country.

On the day of Holi itself, everyone wears a white kurta (a long, cotton shirt worn over trousers) and then proceeds to ‘play Holi’. The rules are very simple; throw as much paint and coloured water on as many people as you can. Holi is such a fun festival and a wonderful one for kids – I mean, what child wouldn’t enjoy drenching their parents with water pistols?!

A Family Adventure at the Jodhpur RIFF

Taking the Kids to the Pushkar Camel Fair

10 Things to do in India with Kids 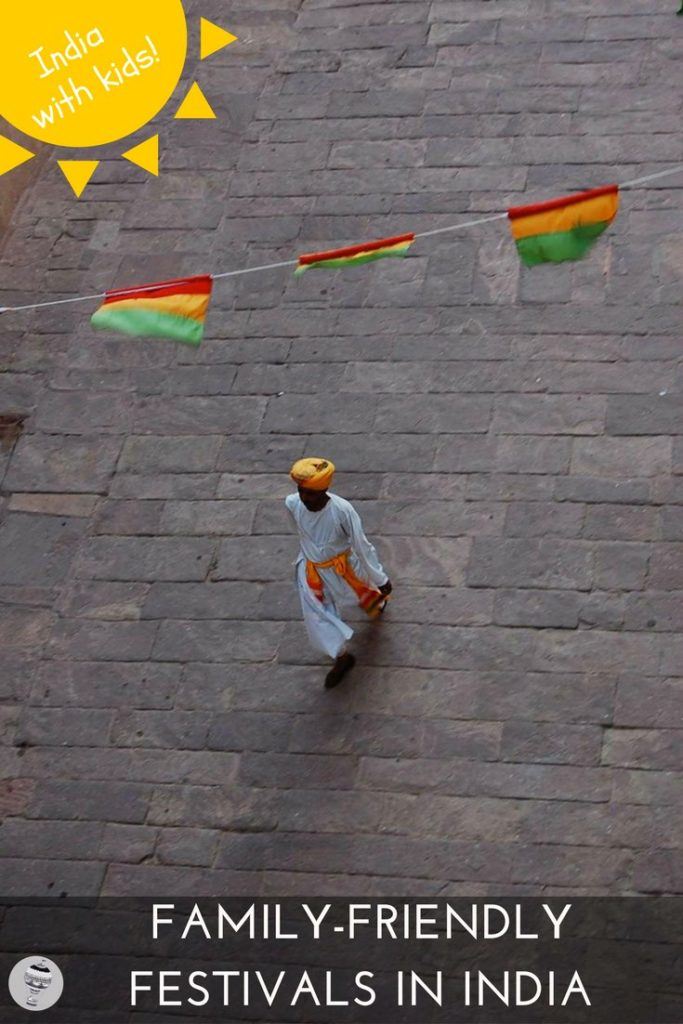 Katja is a travel writer, mum of three and the founder of globetotting, a family travel blog dedicated to discovering the world with kids. Katja has also written guidebooks for Lonely Planet, tried and tested boutique hotels for Mr & Mrs Smith and written for publications including Lonely Planet online, BBC Food, Angels & Urchins and The Australian among others. She's a member of the British Guild of Travel Writers and is also the European Editor of Twist Travel Magazine. She spent 12 years living overseas with her family in Australia, India and Mexico and is now based in London, U.K. She’s a firm believer that you can - and should! - travel with kids everywhere. Follow her family's travels on Instagram.
Scroll to Top