There’s no denying that electronics make travel with kids easier. We have successfully navigated many a long-haul flight thanks to iPads and iPods. The same is true when we arrive on holiday; nothing gives parents an extra few minutes in bed than a toddler watching Peppa Pig on screens.

This post may contain affiliate links. I have been or could be if you click on a link in this post compensated via a cash payment, gift or something else of value for writing this post. See our full disclosure policy for more details.

You may also enjoy these posts:

Get 15% on all orders using this link.

Jaques of London are toymakers who have been inventing and making toys and traditional games since 1795. The family-run company has been passed down through eight generations and are responsible for inventing many of the games that we know and love today.

They are best known for their croquet sets, a game which they played an integral part in creating. Although the exact origins are the game are a little murky, what is clear is that Jaques wrote the first official croquet rules in 1862. They were also the first company to call the game ‘croquet’. Today they sell a range of croquet sets ranging in price from £150 to £5,000!

Other games that the company invented include Snakes and Ladders, Ping Pong and Ludo. Happy Families also started at Jaques and the original illustrations were created by Sir John Tenniel, who later went on to illustrate Alice in Wonderland. In another wonderfully serendipitous event, John Jaques II, who was running the business in the 1860s, was friends with Lewis Carroll, which is no doubt how croquet ended up in Alice’s adventures down the rabbit hole.

Today Jaques produces all manner of classic games and toys. They have a wide range of wooden games for toddlers and preschoolers, a large number of outdoor games (we already have one of their garden rounders sets) and a good selection of travel games. With half-term coming up, we decided to choose a couple of games that we could take with us to France and hopefully have some quality family time spent playing traditional games together.

Many years ago I learned to play backgammon but I had forgotten how to play it until we received this set from Jaques. The Jaques of London 11” Travel Backgammon Set is a beautifully crafted set that makes the perfect travelling companion. When the case is opened, its the ideal size for playing and when you close it, the case can easily fit within a larger handbag or backpack. The board is presented on a leatherette play case and comes, dice shakers and solid resin backgammon pieces and dice.

Game instructions are also provided although I will admit that I quickly resorted to Google and some handy videos to show me exactly how to play. It didn’t take long, however, before I had found my backgammon legs. I think the fact that my whole family – extended and otherwise – were equally rubbish as me helped but it was lovely to sit down and actually play a good old fashioned board game.

Our Jaques of London backgammon set cost £32.99. Other backgammon sets are available, including a couple of other travel options and some on a beautiful wooden backgammon board. As with all Jaques London products, ours came beautifully presented in gift wrap inside a box tied with string.

If you know someone who loves playing backgammon then I would highly recommend this set as a gift.

If chess is more your thing then Jaques London also make a range of beautiful chess boards including a travel chess set.

The second game that we received to review was an elegant Chinese Checkers Game board. It seems odd, perhaps, to call a board game ‘elegant’ but this circular wooden board is handmade and handfinished and just looks really good. It comes with 60 glossy coloured wooden pegs and a handy bag to carry them in. On the other side of the board is a Go Bang game.

I think the last time we played Chinese Checkers was even further in the distant past than when I played backgammon. Again, we referred to the instructions provided and then looked online when we still couldn’t quite work out how to play. This is, I should add, not a reflection of the instructions included with Jacques’ games, rather an inability to follow directions properly!

The kids had a great time playing Chinese checkers and spent many an afternoon over half-term playing against one another. Go Bang is also called Five in a Row (its original name is Gomoku), an abstract strategy board game that originated in Japan. We didn’t play this as much but I can see us spending more time with it during future travels.

If you’re thinking about Christmas presents then do take a look at Jaques. They make a beautiful gift for birthdays or even housewarmings, especially if you know someone with a garden big enough to play a game of croquet.

You can get a 15% discount using this link. 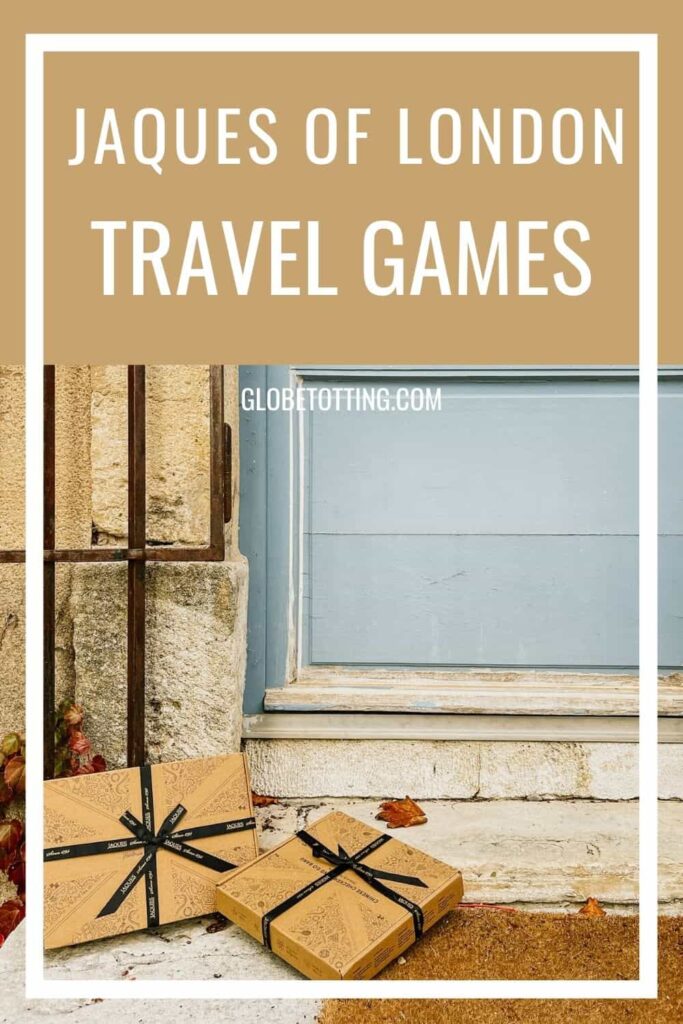