The Indian festival of Holi heralds the arrival of spring with an explosion of colour. Celebrated by Hindus, Sikhs, Jains and other religions, this vibrant ritual is one of India’s most exciting and fun-filled festivals and one of my favourites. For ideas on other family-friendly festivals in India, take a look at this post.

When we lived in India we would regularly celebrate Holi but our favourite experience was when we went to Jaipur in Rajasthan and Hotel Diggi Palace to celebrate. I had been told that this hotel, one of Jaipur’s most popular, marked the colourful festival with a family-friendly event. We arrived in the Pink City the day before and witnessed the Elephant Festival, a fantastic procession of brightly painted elephants and other bejewelled animals being paraded around one of the city stadiums. This snap-worthy cavalcade is held annually on the eve of Holi.

Later that evening, we were invited by the hotel owners to join their family bonfire. The legend of Holi centres on the female demon Holika and a devout child called Prahlad. The story goes that Holika was ordered to take Prahlad into a raging fire (by his father, no less) but that Lord Vishnu saved the child even while Holika burned. The eve of Holi is now known as Holika and fires are lit around the country.

On the day of Holi itself, everyone wears a white kurta (a long, cotton shirt worn over trousers) and so we did the same. In the hotel gardens we found tables laden with steel plates piled high with Technicolor powered paint as well as vats of water and an arsenal of water pistols. The rules of ‘playing Holi’ are very simple; throw as much paint and coloured water on as many people as you can. It’s a wonderful day of fun, games, shouting of ‘Holi-ho’ and complete joy.

The best part about celebrating Holi with kids

Holi is such a fun festival and a wonderful one for kids – what child wouldn’t enjoy drenching their parents with water pistols?  The not-so-good part was discovering that the paint doesn’t wash out of your hair on the first, second or – as my mother found out – the 10th go. You may need to book a post-Holi hair appointment!

1. Bring a scarf or equivalent to cover your hair as well as coconut oil for rubbing in your locks pre-festival; apparently this helps to ensure the paint doesn’t dye your hair.

2. Do like the locals – and Bollywood stars do – and buy white ‘Holi kurtas’ for the family to wear.  All the better to see the colourful mess with!

3. Play Holi in an organised, enclosed environment; the city streets can get a little crazy.

10 Places to go with Kids in India

A Family Adventure at the Jodhpur RIFF Festival 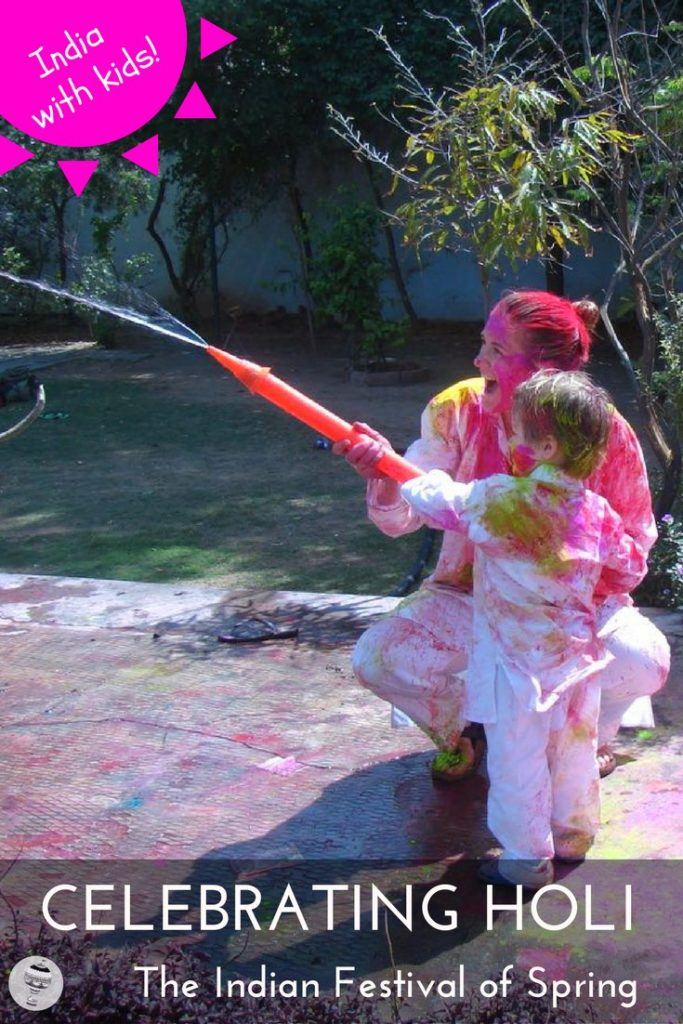 3 thoughts on “How to celebrate the colourful festival of Holi with kids!”