[Tweet “A jeep adventure from #Srinagar to #Leh – with kids! #FamilyTravel #IncredibleIndia”]

Travelling from Srinagar to Leh

In May 2011, our family joined four others on a jeep trek through the Himalayas from Srinagar to Leh. There were nine children, between 2 and 8 years old, and the trip was fantastic. The Kashmir Valley, where we started, is lush and beautiful, with snow at the top of the mountains and rushing rivers cutting through the green valleys filled with wildflowers below.

Ladakh, in contrast, is like being on the moon. It is above the treeline, too dry for snow, brown and rocky without any vegetation. Water, where it exists, is often at the bottom of deep canyons. The villages and towns are remote outposts that cling to an available water source or to a militarily strategic juncture.

The road in between is stunning and terrifying, winding along cliffs, often narrowing to a single lane, occasionally blocked by a landslide, always creeping higher and higher into the Himalayas.

Each family had their own SUV and driver. It was spring and the snowplowed road had just been opened after being closed all winter. We convened in Sonmarg, near Srinagar and spent a few lovely days hiking, fishing, pony-trekking and playing at a tent camp there. The children were in heaven.

And then the drive: three days, with a few lovely stops at Buddhist temples, at peaks and passes, and at the military town of Kargil, but also with many hours in the car, and several long stops at roadblocks. We were following the Spice Route towards Tibet. The ancient Buddhist towns we passed through had once been important stopovers. At the highest point on the road, near the crown of the Himalayas, the children clambered out of the car and into a roaring wind, ropes of prayer flags snapping above them. We stayed each night in a very different camp, one lonely and hardscrabble on a mountaintop, one tucked into a verdant oasis where the kids built castles on a grey sand beach.

And finally, Leh: an oasis of life in a mountain desert. With our gaggle of children, we wandered through magical streets, visiting markets and surrounding temples and stupas. The kids spun the prayer wheels and patted the goats and donkeys.

It was occasionally hard, with a few altitude-sickness induced headaches. It was bitterly cold a few nights, and the food wasn’t always kid-friendly. But it was also completely do-able, a journey to the very top of the world, that even our smallest travellers found magical.

At the Thiksey Monastery, a monk took the time to answer, through a translator, the children’s many questions about the wheel of life that was colourfully painted on the wall. (“If I hit my sister, does it mean I’m coming back as a cow in the next life?”) At the Shanti Stupa, a young couple sat playing guitar and the children danced as the sun set.

IMPORTANT! There is a long history of conflict within the state of Jammu & Kashmir. Remember to consult your own government’s travel advisory for safety advice such as www.gov.uk/foreign-travel-advice/india

[Tweet “A jeep adventure from #Srinagar to #Leh – with kids! #FamilyTravel #IncredibleIndia”]

10 Places to go with Kids in India 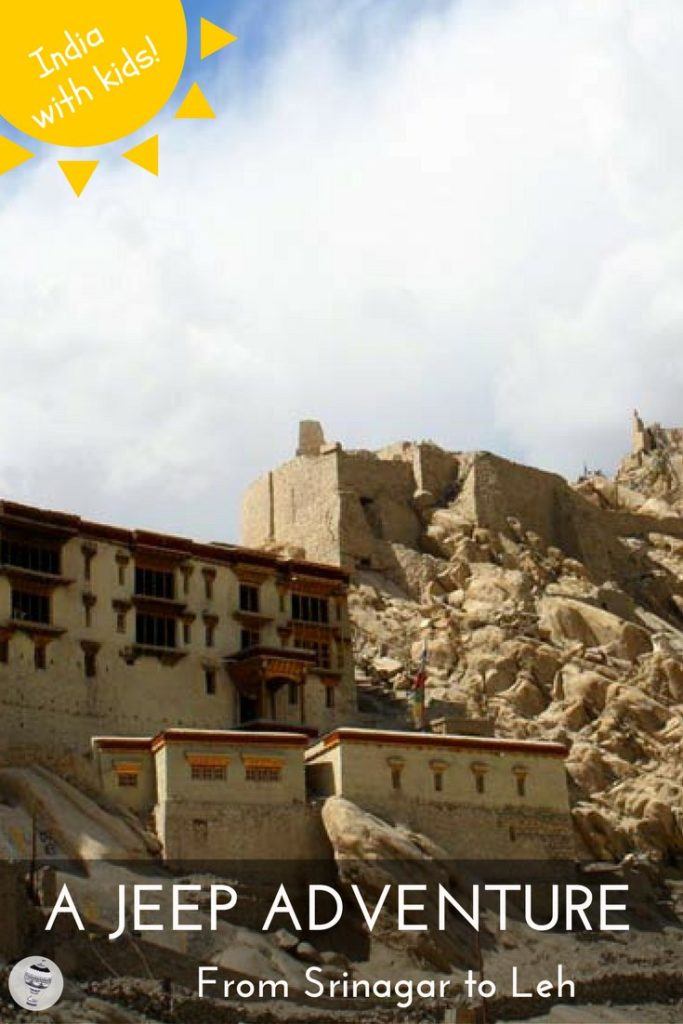 2 thoughts on “A Jeep Adventure from Srinagar to Leh”