September was a big month in London for many reasons but in particular for the passing of Queen Elizabeth II. Thousands gathered in the capital to pay their respects to Britain’s longest-serving monarch and, on the day of the funeral, central London came to a standstill. Buckingham Palace is now closed to visitors until next summer (Windsor Castle has, however, reopened).

As we approach the end of the month, it’s time to start looking forward to what October will bring. October is the perfect time to visit London, and not just because of Halloween and half term celebrations.

Temperatures start to dip this month and the parks and gardens transform from sunny green spaces into rich autumnal landscapes; October is a great time to visit one of the city’s many parks including Hyde Park and Regent’s Park.

For delicious cocktails head to London Cocktail Week in Covent Garden in October, as does the London Restaurant Festival and various Oktober Fest celebrations, if you just happen to be in London without the kids!

This post may contain affiliate links. I have been or could be if you click on a link in this post compensated via a cash payment, gift or something else of value for writing this post. See our full disclosure policy for more details.

The best things to do in London in October

If you are in London during the month of October then here are our pick of the best things to do. And don’t forget that there are lots of free things to do in London too! If you missed our September round-up then you can find that here.

The Hindu festival of light is celebrated on Sunday 9 October on Trafalgar Square. Diwali on the Square takes place from 1pm – 7pm and will feature 200 colourfully dressed dancers followed by performances from the Hindu, Sikh and Jain community.

There is also a marketplace and lots of delicious food plus activities including Sari and Turban tying. There is a dedicated Children’s marquee too.

Celebrate the Festival of Lights on 1 October in Wembley Park where dance and musical performances, a lantern parade and delicious food will help to mark the beginning of the Hindu New Year.

Diwali at the National Maritime Museum

Another free celebration of the Festival of Light takes place at the National Maritime Museum this month with live music and performances, family activities, art displays and more.

Escape to Mexico at Kew Gardens

Bringing a big dash of colour to Kew Gardens this month is the new Mexico installation taking place across the Temperate House. Artist’s and horticultural installations by renowned Mexican artist Betsabeé Romero, designer Fernando Laposse and UK award winning garden designer Jon Wheatley have been designed to reflect the beauty and colour of Mexico.

Make sure to take a look at the Mexico Family Fiesta taking place over the October half term too.

Halloween At The Tower of London

Time to coincide with the October half-term holiday and Halloween in London is the chance to follow in the footsteps of some of the Tower’s most infamous prisoners.

Listen very carefully and you’ll hear the whispers and mutterings of Walter Raleigh brewing deadly elixirs, or the menacing tales of George, Duke of Clarence and Everard Digby who spent their final days within these ancient walls.

Where: The Tower of London; nearest tube Tower Hill; included in admission price

Re:Imagining Musicals at the V&A

Opening on Saturday 15 October is a new exhibition that explores how some of the best-loved musicals have been adapted, revived, and retold. Re:Imagining Musicals explores musical theatre from Miss Saigon to SIX the Musical.

Fashioning Masculinities: The Art of Menswear is on until the first week in November. Other ongoing exhibitions at the V&A include Beatrix Potter: Drawn to Nature (until 8 January 2023) and Africa Fashion (until 16 April 2023). Don’t misss Hallyu! The Korean Wave, which opened last month and celebrates the pop culture of South Korea.

Taking place over the half-term holidays is a fun Halloween-themed storytelling adventure on board what was once the world’s fastest tea clipper. Uncover the creepy elements of the ship’s history, sing a revolting sea shanty and hear the spooky tale of Nanny the witch – and more!

The good news is that the Terrible Thames is sailing into October with more fun along the River Thames. This guided tour along the river is a wonderful way to see some of the city’s major attractions including the London Eye and Tower Bridge, learn fun London facts and laugh…a lot! The boat tour takes 45 minutes. Read more about the Terrible Thames tour here.

When: Daily sailings through October half term

Wildlife Photographer of the Year at the NHM

One of my favourite exhibitions of the year opens this month at the Natural History Museum. The Wildlife Photographer of the Year opens on 14 October in a newly redesigned exhibition space that includes short videos, quotes from jury members and photographers as well as insights from Museum scientists alongside the photos.

Frieze London is back transforming Regents Park into a giant outdoor gallery. This year 280 galleries from 42 countries will be exhibiting in London. Kids and families are welcome just remember that children over the age of two years do need a valid ticket.

Taking place every Wednesday, Saturday and Sunday is this fun chance for families to unleash their inner artists and get ‘painterly’ at the Tate Modern. Kids are encouraged to get messy so think about bringing a change of clothes!

Now in its 15th edition, the London Literature Festival is back this month at the Southbank Centre to celebrate the written and spoken word. There are a number of family events taking place including Voices in Action, which explores how young voices really can change things, and a fun doodling session with author and illustrator Liz Pichon. And more! Check the website for details.

Where: The Southbank Centre

Science Fiction: Voyage to the Edge of Imagination at the Science Museum

Blast off into space on a spaceship in a unique story-led exhibition that examines visions of the future through science and science fiction, encountering authentic items from science fiction films, TV series and literature as well as scientific objects that have shaped modern life.

The BFI Film Festival opens this month with a fun family programme that includes animated tales from across the world as well as My Father’s Dragon about a young boy and dragon stranded on an island full of untamed beasts and Neneh Superstar, about a young black ballet dancer who wins a place at the coveted Opera de Paris ballet school.

See the full family programme here. Remember that last minute tickets are sometimes available on the day so do check back regularly.

Opening on 13 October is this new exhibition at the British Museum that takes visitors through the language of Egyptian hieroglyphs. You’ll discover romantic poetry, shopping lists and even tax returns in this unique exhibition as well as learn how the hieroglyphs were eventually deciphered.

My Neighbour Totoro at the Barbican Centre

The hit Studio Ghibli story My Neighbour Totoro is being performed on stage in a world first. The story of sisters Satsuma and Mei, who spend the summer in the countryside to be close to their mother who is recovering from an illness, is brought to life on stage through puppetry and a reworking of the original film score.

Where: The Barbican; nearest tube Barbican

Black History Month at the Museum of London

Events are taking place throughout October to celebrate Black culture and communities. The Museum of London explores Black Londoners’ stories through articles, videos and photography.

Theree’s a free display exploring the history of grime in East London, a display highlighting four African and Caribbean businesses and their owners, the chance to hear the voices of the Windrush generation and more.

When: Through the month of October (the museum is closing in December before it is relocated to West Smithfield)

Where: The Museum of London; nearest tubes Barbican and St Paul’s

If you missed out on a summer outdoor cinema experience then now’s a good time to make amends. The Backyard Cinema is back in Wandsworth for a short autumn run with lots of fun family films being screen under a bit top tent.

Scheduled movies include The Greatest Showman, Minions: The Rise of Gru, E.T., Elvis and Hocus Pocus.

ELMER and Friends: The Colourful World of David McKee

Opening this month at the Horniman Museum is the first ever major retrospective of David McKee and his colourful patchwork elephant, Elmer.

The Elmer books have sold over 10 million copies worldwide since they were first published in 1989. This exhibition celebrates the much-loved elephant with illustrations, original artwork, a dressing up area a giant magnetic Elmer game and more. 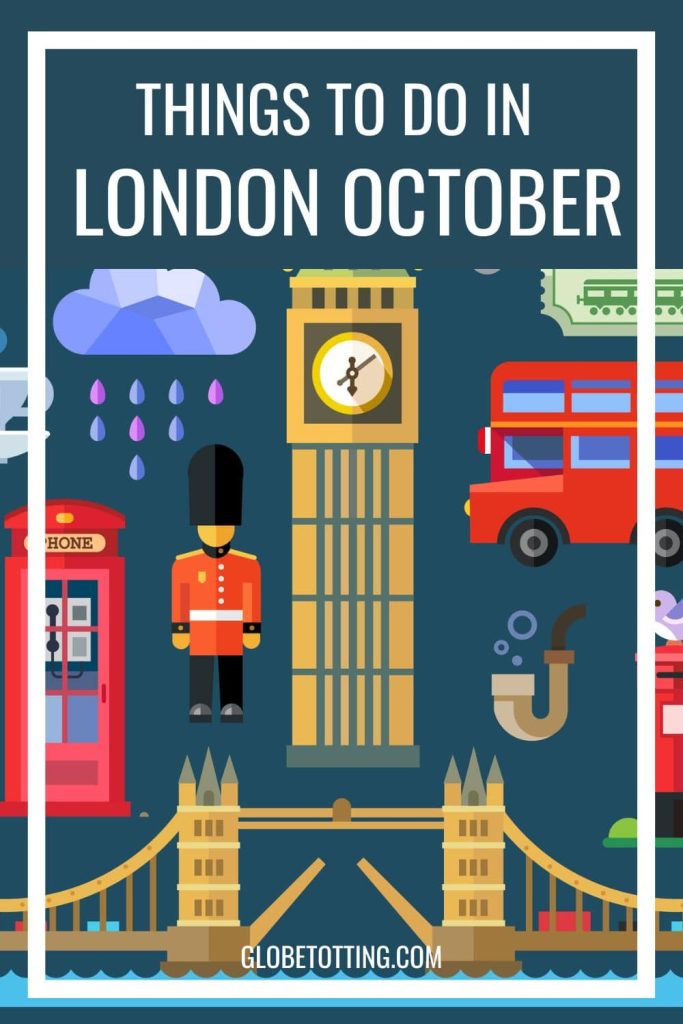