Calais often gets overlooked by visitors who race through from the ferry terminal on their way to sunnier corners of France. But the city of Calais, in the department of Pas-de-Calais in northern France, has had something of an image overhaul in recent years and there’s a lot to keep visitors busy from art museums to historical monuments. But even if these don’t float your boat, there are lots of things to do. As a starting point, Calais now boasts a great beach and even a dragon!

So, whether you’re visiting on a day trip from the UK or planning a longer stay then here are the best things to do in Calais.

You may also enjoy these posts on France:

One of the best places to see Calais’ recent makeover is at the seafront. The area has recently undergone an enormous €46 million renovation, transforming the area into a lively and colourful place with a wooden boardwalk and an enormous Olympic-sized skate park.

The large, sandy Calais beach has rows of white wooden. beach huts and a ‘solarium’ is home to deckchairs where, on a sunny day, you can sit and look out across the English Channel. Visit on a clear day and it’s the perfect place to spot the White Cliffs of Dover.

Built by the same company that created the magical mechanical creatures in Nantes in Brittany, the compagnie du dragon, comes the Calais Dragon (Le Dragon de Calais), a walking, smoke-breathing, enormous dragon who likes to amble along Calais, la Plage, the Calais seafront.

The wood and metal creature measures 12m high and 25m long and requires between four and six operators to manoeuvre it. But the Dragon is not just for show, the creature takes visitors for a ride and can carry up to 50 people at a time for the 30-minute trip along the front du mer, flapping his wings as he goes.

Calais is also home to another reptile, an iguana that sits perched on a rock. This creature can spit water, stand up and move its head and tail using remote controls that are open for visitors to try.

Tickets for rides on the Dragon can be booked and purchased here.

Calais has a long tradition of lacemaking that dates back for two centuries. Originally established by lacemakers from Nottingham who emigrated to Calais in the early 1800s, the city is now renown the world over for the delicate, gossamer-like lace that they produce. Still today the dentelle de Calais-Caudry (a label unique to the lace made in Calais and the nearby town of Caudry) is made by hand using traditional methods.

The City of Lace and Fashion museum is really worth visiting. Housed within an 1870s lacemaking factory building that belong to the Boulart Brothers. Today, the building has been transformed into a modern space that showcases the history of lacemaking as well as techniques used and how lace has been used through the ages. It’s a beautiful museum with an enormous collection.

The displays include everything from antique frocks and petticoats to haute couture dresses by some of the world’s most famous fashion houses including Dior and Givenchy. Daily demonstrations show how the large industrial looms operate and there are video displays throughout the museum with more information on the costumes housed within the museum.

The Calais Lighthouse (Phare de Calais) was built in 1848, replacing the planter that existed at the top of the Tour du Guet, a 13th century watch tower. The lighthouse was electrified in 1883 and automated in 1992. Amazingly, the structure survived being bombed during the Second World War.

Today the structure, which measures 58m high, is open to visitors who can climb the 271 steps to the top for views over the city and the Channel.

Both the lighthouse and Tour du Guet are located in the Courgain Maritime, Calais’ historic fishing district.

The Fine Arts Museum in Calais is located opposite Richelieu Park. The museum is known for its exhibition dedicated to the Bourgeois de Calais (the Burghers of Calais), the city’s famous statue by French sculptor Auguste Rodin. The statue, which stands not far from the museum itself, was commissioned by the city of Calais to tell the story of the siege of Calais in 1347 during the Hundred Years War.

The exhibition at the museum of fine arts explores Rodin’s thought process behind the Bourgeois de Calais and includes 24 works in plaster, bronze and terracotta.

The museum also has a collection of paintings, drawings and sculptures from the 16th to the 21st century.

Rodin’s masterpiece has already been mentioned above but as one of Calais’ most popular sights, it’s worth an entry of its own, not least because the Met Museum in New York calls it “probably the best and certainly the most successful of Rodin’s public monuments.”

The statue represents a story from the Hundreds Years War between England and France when six of the principal citizens of Calais surrendered themselves to King Edward III in order to save their town. The sculpture shows them at the moment of their departure from Calais.

Rodin completed the sculpture in 1889 and later made four casts, one of which is in London.

You can see Les Bourgeois de Calais in front of the Town Hall.

Designed by architect Louis Debrouwer, work on the elegant city hall first started in 1911 only to be interrupted by the First World War in 1914. Work restarted (and damages repaired) in 1925, only for the building to be damaged again during WWII. Nevertheless, the building today is a city landmark and a UNESCO World Heritage Site. It’s also the backdrop to Rodin’s Bourgeois de Calais, mentioned above.

Visitors can walk up the stairs (or take the lift) of the adjoining Belfry. At 75m high, the view from the top is fantastic.

If your’e visiting Calais with kids an old church might not be high on your list of things to do but if you have time then it’s worth stopping by the Eglise Notre-Dame de Calais, the Church of Notre Dame and the oldest church in Calais.

Built between the 13th and 17th century (it took a long time to build!) it’s an amalgamation of styles and probably the only church in continental Europe with Tudor influence – not least in its English-style Tudor Garden. This is where General Charles de Gaulle married local Calais girl (also known as a Calaisian) Yvonne Vendroux in 1921.

The church was heavily damaged during both world wars; its stained glass windows were blown out by bombs in 1915 and it was badly damaged between 1940 and 1944. Restoration work began in the 1960s and was completed in 2013.

Located in the Parc Saint-Pierre, opposite the Town Hall, is the small World War II Museum. Housed within a WWII bunker, which once served as the Navy’s headquarters to the port of Calais and transmission centre for the northwest corner of France, the museum is particularly interesting for its collection of black and white photos which showcase every day life in a city under occupation.

Located in the heart of the city is Richelieu Park, a wide open space perfect for a quick run around. Standing in the centre of the park is a statue of De Gaulle and Churchill.

Just outside the town of Calais is the Côte d’Opale (Opal Coast) and the Grand Site des Deux Caps, a nature reserve that sits between two dramatic cliffs, the Cap Gris-Nez and Cap Blanc-Nez. This is a great place to come for long walks and views over the Channel to the English coast on the other side.

The two cliffs face each other on the Opal Coast and a scenic path connects the two. Cap Blanc-Nez is, as the name suggest, a white chalk cliff that rise to a height of 135m. Opposite is Cap Gris-Nez, a 45m-high cliff made of sandstone, grey clay and limestone. 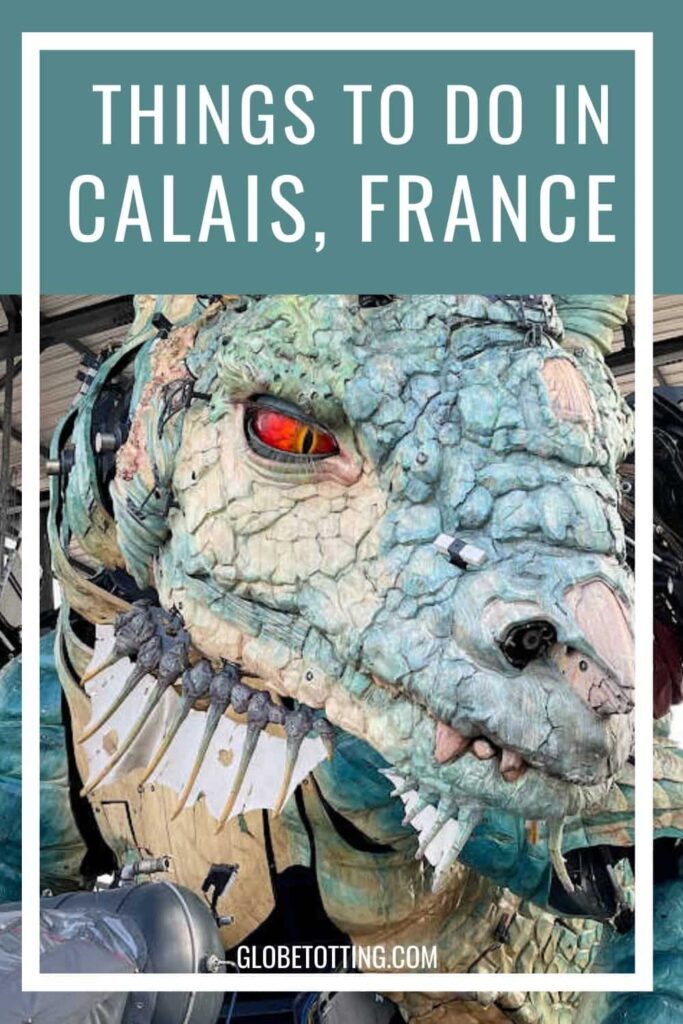