London is full of things to see and do but some of my favourite places to visit in the city are the more unusual ones. Take Eel Pie Island for example.

This tiny island sits in the middle of the River Thames, a mudflat sandwiched between Richmond and Twickenham. Despite its small size, the island is the largest in the London section of the river and the one with the most colourful history.

As far as unusual places to visit in London go, Eel Pie Island definitely sits at the top of the list.

Originally called Paryshe Alte, Eel Pie Island has been around for centuries. Some historians believe that it was once the site of a monastery, others argue that it was used by Henry VIII as a courting ground for his many mistresses.

Day trippers began visiting the island in the 17th century, attracted in part by the renowned eel pies that were served by the island’s inn. Today, eel pies are few and far between but they were plentiful in the Victorian era; eels were one of the few fish that could survive in the polluted Thames.

In 1830, the three-storey Eel Pie Island Hotel opened and was a popular spot for day-trippers. Eel Pie Hotel was even mentioned in Charles Dickens’ novel Nicholas Nickleby as a place where people could “dance to the music of a locomotive band”.

In 1880 the Twickenham Rowing Club was established at the island. The club still runs today, making it one of the largest and oldest rowing clubs in London.

From the early 1900s, wooden-framed properties began to appear on the island, used as summer houses by wealthy Edwardian Londoners. Some of the houses remain today as do two of the boatyards that were built to service boats working on the Thames.

In 1957 a pedestrian bridge was built linking the island in the middle of the Thames to the mainland.

You may also enjoy these posts on London:

But what really put Eel Pie Island on the map was music, in particular rock n roll.

Arthur Chisnall, a club and concert promoter, later took over and continued to organise jazz nights, even inviting US blues musicians such as Howlin’ Wolf to play.

In 1963, Mick Jagger and the Rolling Stones played a weekly gig for a short period of time and the hotel later saw everyone from The Who and Pink Floyd to Genesis, Eric Clapton and Screaming Lord Sutch take to the stage. Rod Stewart was a regular here, Black Sabbath played and even David Bowie performed to a packed dance floor.

Sadly, a lack of funds meant that the hotel was forced to close in 1967 at which point it was taken over by waifs and strays. In 1969 the hotel was occupied by a group of anarchists, including Clifford Harper a well-known illustrator for many alternative and mainstream publications.

By 1970 it was the UK’s largest hippie commune and the building was placed under a demolition order until the legendary Eel Pie Island hotel burned down in 1971 in a mysterious fire.

For most of the year the island is closed to visitors, however twice a year it does open to the public. The island community hosts an open house that allows the public to visit the artist studios. During these weekends you can walk across the bridge onto the island and wander from studio to studio, chatting to the local artists.

It’s an unusual day out and a fascinating glimpse into a corner of London usually hidden from public view.

Back on the mainland in Twickenham is the Eel Pie Island Museum which shares the history of the island including photographs and memorabilia. The museum is a short walk from the bridge pedestrian bridge over the island.

How to visit Eel Pie Island

Eel Pie Island is located in the middle of the River Thames. Twickenham is the closest train station and from there it’s a 12 minute walk to the bridge that leads to the island. Check the Citymapper app for travel details. 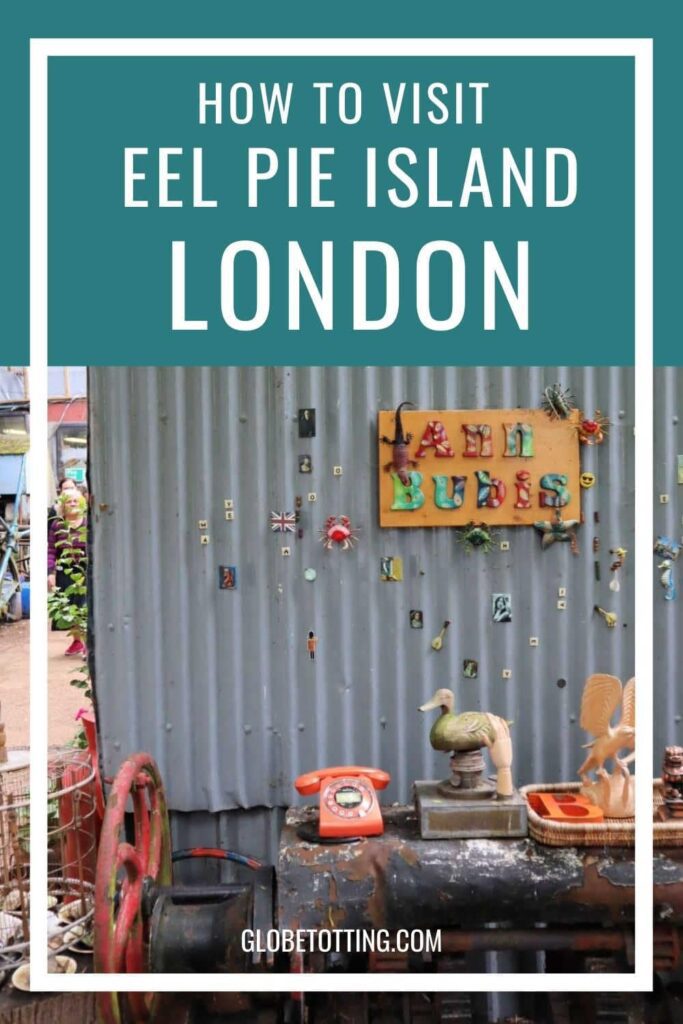 4 thoughts on “Eel Pie Island, the tiny island with a fascinating history”