Like countless families around the world we have watched the Disney animated film Frozen too many times to count. We know the lyrics to almost every song, we have the dress up clothes, and we watched the sequel, Frozen II, as soon as it was released.

But despite buying into all things Frozen, I wasn’t convinced that the stage version of the story of two sisters, an icy kingdom and magical ice powers would necessarily translate to the stage. Or rather, I thought that Frozen the Musical would be a performance that the kids would love and parents would put up with because their children would enjoy it.

I could not have been more wrong. This musical extravaganza is spellbinding, holding audiences members of all ages completely captivated from start to finish.

Disclosure: We were guests of Made.Travel and The Travel Connection Group for the purpose of this review. This post may contain affiliate links. I have been or could be if you click on a link in this post compensated via a cash payment, gift or something else of value for writing this post. See our full disclosure policy for more details.

Frozen the Musical first opened in London’s Theatre Royal Drury Lane on 27th August 2021 and has been playing to packed audiences – and dozens of young children dressed as Elsa and Anna – ever since.

The musical, as with the films, is loosely based on the based on the book Hans Christian Anderson fairytale “The Snow Queen” and written by Jennifer Lee. It’s directed by Michael Grandage, has music and lyrics by husband-and-wife duo Kristen Anderson Lopez and Robert Lopez, and with gorgeous choreography by Rob Ashford.

The venue, the Theatre Royal Drury Lane in London’s Covent Garden, is the oldest theatre in London still in use. In 2019 it closed and underwent at two-year-long restoration project, restoring the theatre to its former glory while also making it more comfortable for audiences. Today, the refurbished Drury Lane enjoys wider seats with more legroom and the auditorium has been reshaped to make the general audience feel closer to the performers.

Frozen, the stage musical, is the first performance to be staged in the newly renovated venue.

The magic of film translated on stage

The opening scenes start much as the story begins in the film, with young Anna singing about building a snowman. We see Elsa’s supernatural powers injure her younger sister, meet the trolls who heal Anna and watch as the Kingdom of Arendelle barricade its doors and the King and Queen search for a way to help their eldest daughter to control her powers.

But then the production takes on a life of its own rather than simply being a carbon copy of the animated movie. This is thanks to some incredible special effects and visual thrills, dazzling signature ballads, beautiful costume design and amazing performances.

As well as all the hit songs from the films the musical features a handful of new songs including a hilariously comical musical number based on the Nordic idea of hygge that sees naked (not really!) characters dance their way out of a sauna. Like much of the audience, I had tears rolling down my cheeks at this point.

The original songs are performed with real heart and emotion. In fact, the signature song, the Oscar-winning Let It Go is even more powerful in this live setting than in the film. Elsa, played by Samantha Banks, brings the stage to life and delivers a stunning performance of not just this song, but every other song too. She is brilliant in the role.

It’s during her performance of Let it Go that one of the most mind-boggling special effects takes place, which is an impressive feat given that the entire show is packed full of magical moments from the ice bridge in danger of falling apart to the giant shards of ice unleashed by Elsa after her coronation. As she sheds off her old identity, builds her ice palace and embraces her magical powers, the stage comes to life and the audience is thrilled.

The other cast members are equally impressive and utterly believable in their roles. Stephanie McKeon is brilliant as the goofy and brave Anna, Obioma Ugoala as the ever dependable Sven and Oliver Ormson as the duplicitous Hans. Richard Frame is perfect in the role of weasly power-hungry Duke of Weselton and his dance across stage during the coronation celebrations is genius.

It’s Olaf, however, who – much like in the movies – steals the show. On stage the loveable snowman is a puppet, manipulated expertly by Craig Gallivan. The reindeer Sven features too, played by a single actor, Mikayla Jade. She is amazing at bringing this lovable shaggy reindeer characters to life. Michael Curry, the puppet designer behind The Lion King, designed both the Sven and Olaf puppets.

But even though the special effects are dazzling (designer Christopher Oram created the world of Frozen on stage), they don’t detract from the story. At its heart, this stage adaptation of the Disney musical fantasy film, is still a story about two sisters, the challenges faced when growing up, and the importance of self-acceptance, courage and family.

We loved every moment of this performance and I can guarantee that fans of the film will too. But even those who are not die-hard fans of the movie won’t fail to be impressed but this spectacular, spellbinding and simply magical production.

The best seats to watch Frozen the Musical

If you want to be in the heart of the action then look at seats in the Stalls. The central sections give the best overall views of the stage. The back of the Stalls can feel quite far back and the overhang of the level above means that the top of the stage is cut off.

We sat in the Royal Circle which has great views. This is definitely where I would recommend sitting if you can. The overhang from the level above restricts the top of the stage for seats int he back rows of the Upper Circle but not as much as in the stalls.

The Grand Circle looks down onto the stage offering panoramic views. Some seats at the end of rows can have restricted views.

The Balcony is the highest level of the auditorium. If you sit here opt for seats in the central section, which have the most unobstructed views.

The theatre has booster seats for younger kids. The website A View From My Seat does what it says and his very helpful as is Which Seats. 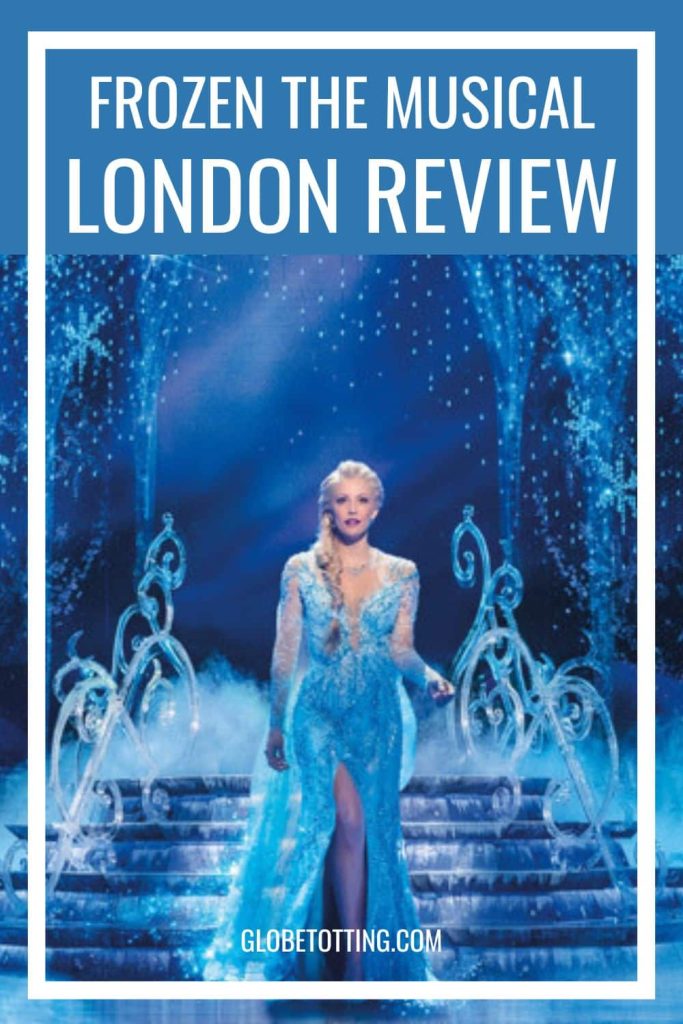