Budapest, often referred to as the Pearl of the Danube or Paris of the East, is a gorgeous city with a fondness for children. Hungarians are an interesting product of the country’s history. For having lost every war they’ve been a part of, Hungarians are no less friendly and proud. And yet they also exude the humble and independent disposition of hard workers focused on family. During the time it was ruled by Russia, Hungary’s position at the Western edge of the Communist territories afforded it special leeway; it was more Westernized than the rest of Eastern Europe at that time, but even today it is far less Western than such countries as Spain and France. We’ve been living here for the last 18 months, and we have a lot more to learn about Hungary and its people. Here, though, are 10 things we (and our kids) have greatly enjoyed about living in this stunning European jewel.

Chimney cakes are a Hungarian specialty. While you watch, bakers will roll raw dough around a wooden spit, coat it in butter and sugar and then bake it over glowing coals until the surface is a golden brown. Then they’ll sprinkle it with your flavor of choice (ours is fahéj, or cinnamon). Trust me (and our kids): It tastes amazing. For an extra treat, grab a cone of fagyi, or ice cream. During the summer months, everyone in Budapest eats fagyi. Stands are everywhere. Even the little old Hungarian ladies will be walking down the street licking a cone.

Ride one of the world’s oldest subways

The Földalatti, or Underground, is one of the oldest subway lines in the world. It opened in 1896 as a means of getting people from the downtown core out to City Park at the end of the famous Andrássy Avenue. The subway line is actually right underneath Andrássy, literally just a couple of feet below the street surface. A small museum dedicated to this line lives at Deák Ferenc tér, right next to the main ticket office. It contains three cars from the line’s past, including one of the first cars. If you want to get inside that one for a selfie, pay the extra 150 forint for a photo ticket.

Walk with the animals at the zoo

Our boys love the zoo. One of the funnest features is that a number of exhibits let visitors walk in and among the animals. Ever watched a vulture eat a meal up close? Ever been chased by a friendly emu or followed around by a curiosity of lemurs? The Budapest Zoo is the place. The zoo, first opened in 1866, is also an architectural treat. Pay special attention to the entry gate, the elephant’s building and the owl’s castle, which is the last original structure still standing. The zoo also features one of the best playgrounds in the city, and it’s a great place for parents to sit and rest while the kids work off their boundless energy.

Let someone else’s kids take you for a ride

Up in the Buda hills is a train line run by children. The 10- to 14-year-old boys and girls sell the tickets, collect them on board the train, manage the railway crossings and more. The ride itself takes you among the trees, through a tunnel and back and forth around the hills up on the outskirts of the city. For extra fun, take the Cogwheel Railway (listed on the transit maps as tram 60), a retro-looking line that climbs from the river flatlands up into the hills. From the last stop, it’s just a short walk to the Gyermekvasút, or Children’s Railway.

To take in expansive views of the city, take a short hike up one of the hills on the Buda side of the river. Gellért Hill is the tallest, but it’s not too tough for kids. Our 5-year-olds have made the hike many times without complaining. At the crest of the hill is the Statue of Liberty, the Citadel and incredible views of Budapest. For a less ambitious hike, walk up to Fisherman’s Bastion, a collection of lookout towers near Matthias Church, a 700-year-old Catholic church built in the Gothic style.

[Tweet “#Budapest, the Pearl of the Danube and an awesome place for kids! #Hungary @welovebudapest #FamilyTravel”]

Float down the Danube

On working days, a Budapest transit pass will get you free access to the D line, a boat that cruises up and down the Danube River, from the north end of the city to the south and back again (you can also buy single tickets). We took it at night in the winter and were afforded gorgeous views of the Parliament building, which in darkness glows bright enough to be seen from nearly anywhere.

Budapest is an amazing city for kids enamored by public transit. Every form of transit imaginable (trains, trams, buses, trolleys, subways, boats and even a chairlift and funicular) is available in the city, and they’re all used often by the locals (except, perhaps, those last two). One fun, free thing to do is visit the Keleti and Nyugati train stations. Not only do you get to watch the trains (hundreds per day) come and go, but they’re also great spots for people watching. Music is constantly drifting from the subway passages as buskers earn their livings, and street vendors hawk products among the varied crowds. Another great public transportation option is tram line 2 along the Danube, which has been voted among the world’s most beautiful.

Gulyás is essentially the national dish of Hungary. Seasoned with strong doses of paprika (the ubiquitous spice that’s in nearly every Hungarian dish), gulyás is a stew dominated by meat (beef, pork or lamb, usually) and onions, carrots and other vegetables. You can buy it in any Hungarian restaurant (or, better yet, meet a Hungarian friend who’ll cook it for you). Another favorite is lecso, a sausage-based stew.

In the winter, ice skating rinks pop up all over the city. Pretty much any place that held a basketball court or soccer pitch in the summer transforms into a skating rink in the winter. Ice skating is something of a national pastime in Budapest. The biggest and best of the rinks is in the massive City Park, or Városliget. It’s one of the biggest in Europe, and it’s flanked by the Vajdahunyad Castle on one side and Heroes’ Square on the other. Oh, and if you’re here in winter, the Christmas markets are a must-do. Our favorite is the one at Szent István Bazilika, which is lit up in laser shows every half hour.

Budapest is famous for its use of space. Ruin pubs, for example, are bars that spring up in derelict buildings and provide an ambiance unlike anything you’re used to. But for families with kids, the best use of space in Budapest are the myriad playgrounds. They are everywhere, tucked into empty lots and prominently featured on busy street corners. They’re always completely fenced, full of fun toys and frequented by locals who aren’t afraid to help your kids out if they need assistance. Budapest is an amazing city for children.

[Tweet “#Budapest, the Pearl of the Danube and an awesome place for kids! #Hungary @welovebudapest #FamilyTravel”]

10 Things to do with Kids in the Bavarian Forest

Berlin with Kids: Top 10 Things to Do!

My Family Adventure: Springtime in Crete

A Treasure Hunt Tour of Venice!

Your Perfect Day in Geneva with Kids 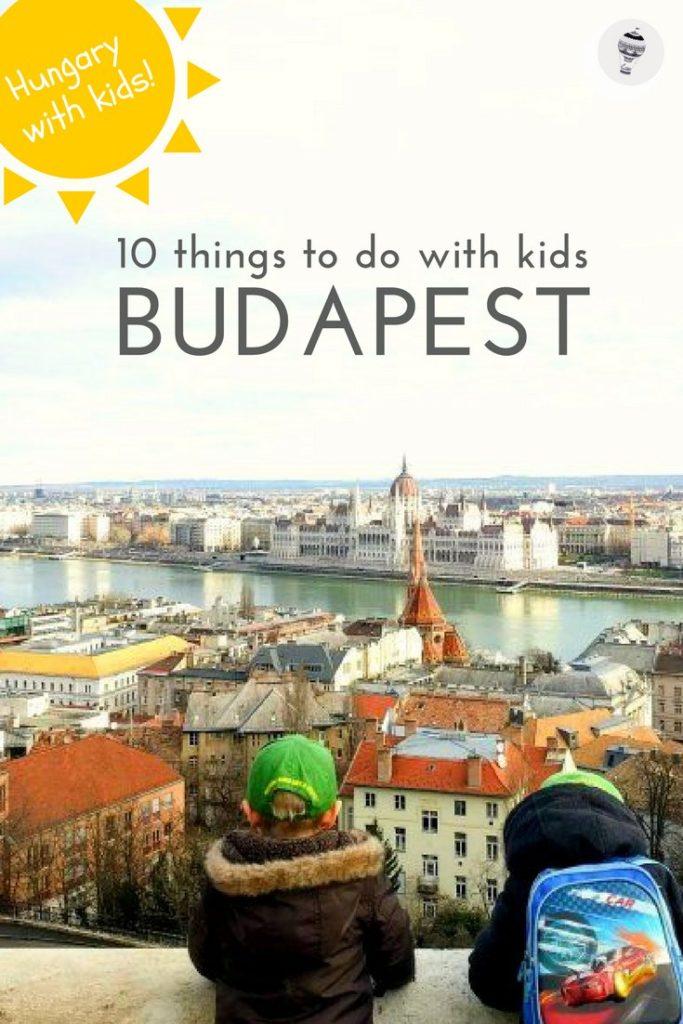 [author] [author_image timthumb=’on’]https://globetotting.com/wp-content/uploads/2017/03/The-Anderson-Five.jpg[/author_image] [author_info]Guest post and photos by Matthew Anderson. Matthew is a former journalist and communications professional in higher education in the United States. He left his job in August 2016 to move to Hungary with his wife and three young boys. Originally from the Pacific Northwest, the Anderson family are immensely enjoying their new life in Budapest. Matthew and Brittany have adopted two children, fostered several more and hope to, someday, adopt again. Matthew is blogging about their family adventures at hewanderson.com.[/author_info] [/author]