Firstly, a confession. I went to see the latest James Bond movie, No Time To Die, and I fell asleep. This is, however, not a reflection upon the film (my husband loved it). Rather the fact that no sooner do I sit down to watch any film then I start to snooze, especially if a comfy cinema seat and a glass of red wine is involved.

Nevertheless, despite not making it through the epic that is Daniel Craig’s last outing as Britain’s most famous secret agent, I was really looking forward to our private James Bond Walking Tour of London.

Disclosure: I was a guest of ToursByLocals for the purpose of this review. This post may contain affiliate links. I have been or could be if you click on a link in this post compensated via a cash payment, gift or something else of value for writing this post. See our full disclosure policy for more details.

The tour is run by ToursByLocals, a company that connects visitors with experienced local guides. We had worked with them once previously on a private Harry Potter tour of London, which the whole family loved. When they got in touch asking if we would like to experience another private tour, we jumped at the chance. Especially when we discovered that we would have the same tour guide as last time, Dewi.

We met Dewi almost a year to the day that we had met him dressed in his Gryffindor uniform. This time we began our tour at Somerset House. And, even though Dewi was not sporting a James Bond tuxedo, we were all happy to see him again and excited to visit film locations associated with Bond movies around Central London.

Dewi is an excellent tour guide; as a trained performer he’s fun and engaging and he’s extremely knowledgeable, constantly throwing out fun facts and quirky tidbits about London.

For a Bond themed weekend, book the Budding Bonds package at St Ermin’s Hotel in addition to this James Bond Tour.

You may also enjoy these posts:

Somerset House was originally built for Edward Seymour, the Duke of Somerset, in 1547. It was demolished in 1775 and replaced by a new Somerset House, which became the first purpose built office block for the Admiralty. This was a fitting start point for our tour given that James Bond was a Royal Naval Reserve Commander. Somerset House was used as a filming location for both Tomorrow Never Dies (1997) and Goldeneye (1995), both starring Pierce Brosnan.

It also happens to have been used as a filming location for a number of other movies, its neoclassical architecture making it an easy stand in for myriad other countries and cities, including St Petersburg.

As a family we haven’t watched many James Bond films together. My husband is a big 007 fan and I saw various Bond movies when I was growing up. However, our three kids haven’t discovered the joy of a Bond film yet.

Hopefully this tour would give them a push in the direction of the world of James Bond.

Fortunately, despite this wide range of James Bond knowledge, Dewi was able to keep everyone’s attention for most of the tour.

From our meeting point we walked out onto Waterloo Bridge. Here, Dewi shared the story of Georgi Markov, the Bulgarian dissident writer who was poisoned while waiting at a bust stop. Apparently he was pricked with an umbrella tipped with the poison ricin. It’s believed that the KGB were behind the hit.

It’s stories like these that really bring this James Bond tour to life. Yes, it’s not directly tied to the Bond franchise but it is a fascinating spy story.

Next stop on our tour was the legendary Savoy Hotel, which opened in 1889. Author Ian Fleming was a regular visitor to both the hotel’s Savoy Grill and the American Bar. The hotel featured in the book Live and Let Die where Bond meets Felix Lighter. It’s also where Fleming is said to have taken Sean Connery for lunch before filming Dr. No.

The playwright Noel Coward lived at The Savoy while working as a spy during World War II. Apparently, Cowards was so successful at using his celebrity contacts to help the British side – and therefore so important to the war – that not even Winston Churchill knew that he was operating as a spy.

Product placement in Bond movies is as integral to the franchise as dinner suits and martinis shaken, not stirred. But according to our guide, Dewi, the first person to do product placement was Arthur Conan Doyle, author of Sherlock Holmes. Apparently he would mention places in London in his books in the hope of being invited there.

And here’s another fun product placement fact for you; in the latest Bond movie, you don’t see any close-ups of the characters using their phones. Similarly, when Daniel Craig’s Omega watch is in close view, the watch face is blurred. Both of these are because of the long delay in between filming No Time To Die and releasing the film.

From The Savoy we walked towards Rules, London’s oldest restaurant. To give you an idea of quite how old it is, the restaurant was founded in 1798 when Napoleon was in Egypt.

Rules is where, in Spectre (2015), M (played by Ralph Fiennes) is told by Q and Moneypenny that Bond is heading to North Africa. According to Dewi, Rules has done good business off the back of its association with Bond.

Our sightseeing tour then passes The Whiskey Exchange where Dewi quizzes us on Bond’s tipple of choice. While we all know how 007 likes to drink his martinis, does anyone know why? According to Dewi, Bond likes his martinis shaken as it’s easier to detect any potential poison. That’s also why Bond never drinks red wine, it’s far too easy to hide toxins.

Not far from Rules is Charing Cross Station where an abandoned section of the Jubilee Line sits underground. The abandoned line is available to hire for filming from TFL. This is where, in Skyfall, Bond chases Silva, the baddie played by the excellent Javier Bardem (yes, he is one of my favourite Bond villains!).

Apparently people have tried to recreate the scene of Bond sliding down the escalators and have ended up in hospital. Anyone who has ridden the Tube before will know that the metal anti-slide pattresses are a permanent feature and can do serious damage!

As with our Harry Potter tour, Dewi carried an iPad with him and showed us the various Bond scenes filmed in these various locations.

On our way to the National Gallery we passed a statue to Edith Cavell, British nurse and spy who was executed by a German firing squad for helping Allied soldiers escape.

We didn’t go into the museum as the painting that features in Skyfall, where Bond and Q meet in front of The Fighting Temeraire, is currently on loan to the Tate Britain.

Near to the National Gallery in Trafalgar Square is the Fourth Plinth, which has a handy spy connection of its own. The End, by Heather Phillipson, which will be on display until September 2022.

The sculpture features a large dollop of whipped cream topped with a cherry and a drone camera. Log onto the associated website, theend.today, and you can watch yourself – and the rest of the world – in Trafalgar Square in real time.

Next stop on our tour of Britain’s most famous spy was The Mall, where the streets were eerily empty. According to Dewi the road is closed because they are currently filming there, although he wasn’t sure what it was.

At the end of The Mall is, of course, Buckingham Palace, which featured in Die Another Day with Pierce Brosnan. There is a 1km exclusion zone over this area, however, which meant that the the arrival of Bond baddie Gustav Graves by parachute was filmed elsewhere. The villain, played by Toby Stephens, was suspended under the arm of a crane.

This was one possibly my favourite part of the tour because Dewi had some excellent Bond girl trivia. Apparently, the Queen herself is the oldest Bond girl in the world, having appeared in the opening ceremony – and the brilliant sketch with Daniel Craig – for the London 2012 Olympics.

Even better, apparently the only people who knew she was taking part in the skit were Prince Philipp and Prince Charles. The rest of the Royal Family were as surprised as all were when we saw her parachute into the Olympic Stadium.

We moved on to the Horse Guards Parade, where Ian Fleming worked in one of the offices for a time. Here Dewi shared more espionage trivia including some of the possible real life people who could have inspired characters in Fleming’s books including Q and Moneypenny. Dewi also told us how his great-uncle had been a member of the SOE, a WWII organisation that had its headquarters in St Ermin’s Hotel.

The remainder of the tour took in a handful of familiar locations that you would never know had links to Bond unless someone told you. The Corinthia Hotel was, apparently, the HQ for M16 when the Bond stories appeared in comic strips in The Express. Nearby is the One Twenty One Two, where a blue plaque dedicated to Sir Mansfield Smith-Cumming, the first director of the Secret Intelligence Service, stands outside. Around the corner is the headquarters for the Ministry of Defence.

The tour officially ends at MI6, the headquarters of the Secret Intelligence Service. We, however, decided to end the tour at Westminster, the beating heart of British politics. Westminster featured in Spectre and Westminster Bridge was shut down over six consecutive nights for filming. According to Dewi, this was the largest shut down of London for filming ever.

From Westminster it’s a short bus journey to the final location at MI6. Our youngest was getting very restless by now, however, so we said goodbye to Dewi and hopped on the tube home. Westminster station also features in one of the Harry Potter movies but you’ll have to read this tour review in order to discover which one!

All in all it was a great tour; it’s a very fun way to discover the city and more about London’s history as well as a real film adventure for any James Bond fans. 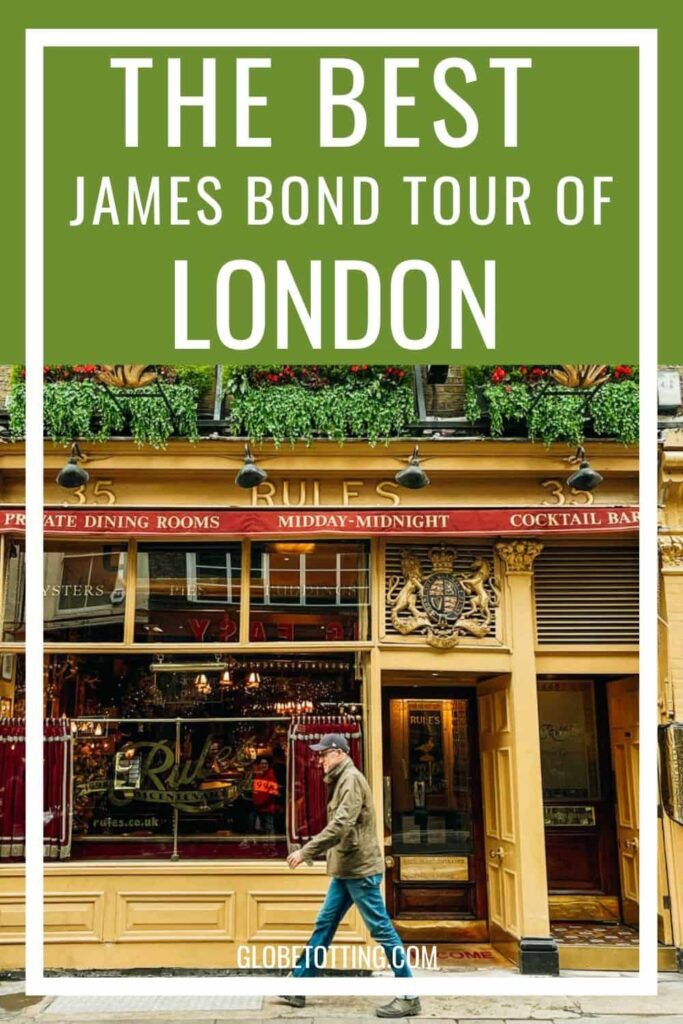