After 18 months of on and off lockdowns and a week of scorching temperatures, I probably would have been happy to check into any hotel with a restaurant and air conditioning. But then we discovered St Ermins Hotel and I realised that what I had been missing during the days of restricted travel was not just hotels, but luxury hotels that really know how to look after families.

We only had one night at St Ermins Hotel London with kids but it was enough to make me check the calendar to see how quickly we could return.

Disclosure: We were guests of St Ermins Hotel for the purpose of this review. All opinions are entirely my own. For more information, please see my disclosure policy.

This central London hotel is one of the best London hotels for families looking to explore the city. Located at St James, the hotel is within walking distance of some of London’s most famous sights including Buckingham Palace and Westminster Abbey. If you’re visiting from overseas or even, like we were, enjoying a staycation from a different corner of London, the location in the heart of London is a real treat.

But it’s not just the attentive service and luxurious soft furnishings that will have us rushing back. For anyone who grew up watching James Bond films or for families who love the Spy Kids series, there can only be one hotel to stay in when on family vacations in London.

Behind the ritzy facade of St Ermins are stories of espionage, sabotage and rumours that a secret tunnel runs from the hotel lobby directly to the Houses of Parliament. This is a hotel with a fascinating history.

Admittedly, from the outside – and indeed from the lobby – St Ermin’s looks like little more than a fancy hotel. Admittedly a very fancy one. The lobby is home to double height ceilings, a dramatic grand staircase and elegant plasterwork created by skilled Victorian craftsmen. The theatrical entrance was designed by J. P. Briggs, a Victorian theatre designer, who transformed the building from a residential mansion block into a hotel.

Little did he – or anyone – know that the hotel would later become a central point for the British intelligence services.

During the 1930s officers of Secret Intelligence Service used the hotel to meet agents. Caxton Bar, the hotel bar, became a popular spot for intelligence officers to meet their agents.

In 1940, during the Second World War, Prime Minister Winston Churchill formed the SOE (Special Operations Executive) and charged them to “set Europe ablaze”. The SOE, also known as Churchill’s Secret Army, took over an entire floor of the hotel as its headquarters.

London is home to plenty of historic hotels but few can boast a history like this one!

St Ermins links to British spies has been translated into a brilliant ‘Budding Bonds’ package for families.

Upon check-in, children are handed their own ‘Top Secret’ briefing designed to test their own observational and sleuthing skills. Inside is a code breaking booklet and secret agent aptitude test. My three budding agents were encouraged to explore the hotel itself as well as the immediate surroundings.

The kids quickly discovered that their covert operations were not easy and required some serious sleuthing. They also required the help of one or two more established secret agents – otherwise known as the extraordinarily friendly staff.

Mission accomplished, my rookie agents received a special pass, which allowed them to order a mocktail from the hotel’s Caxton Bar – shaken not stirred, obviously. Many a famous face has ordered a drink at this bar including Winston Churchill who apparently regularly enjoyed a glass of his favourite champagne here, as well as Ian Flemming.

The Caxton really came to prominence when it was revealed that double agents Burgess and MacLean, part of the infamous ‘Cambridge Five’, would meet their Russian counterparts here and handover classified information.

The hotel is home to 331 rooms including 41 suites and Family suites. Finding hotel rooms for families of 5 (or bigger) can be tough in central London but the the good news for families of five – such as ours – is that their 27 Family Rooms can accommodate larger families.

Our spacious family room came with two Queen-sized beds, two bathrooms and an additional sofa bed. The space with the sofa bed can be used as a mini living room or made up as an additional bed. Handy when you are a larger group looking for family friendly hotels in a central location.

St Ermins have also recently introduced teepees for family stays; ours was decorated with bunting and lights, and with colourful pillows inside. Ask the staff nicely and they’ll make up a bed in the teepee for a special overnight stay.

Other things that we appreciated about our stay was that we had plenty of space for the whole family, that the rooms were ever so quiet (despite being in the heart of the city) and, of course, afternoon tea.

This was the second time that we had been lucky enough to enjoy afternoon tea at St Ermins. Served daily in the tea lounge, this quintessentially British experience is a real treat.

We enjoyed bottomless cups of tea, freshly baked scones, a selection of savoury items and plenty of sweet treats. For children there’s the Mini Gardener Tea inspired by the hotel’s kitchen garden and rooftop bees.

Don’t miss the chance to see the 350,000 Buckfast bees that live on the hotel’s third floor. Time your visit right and you’ll see the beekeeper hard at work behind the glass windows. When we visited, we were lucky enough to see the queen bee.

Executive Head Chef Alexander Boyd uses honey produced by the hotel’s permanent residents in many of the dishes on the Caxton Grill restaurant menu. This is alongside fruit and veg grown in the hotel’s kitchen gardens which, in central London, are dotted across the hotel rooftops.

Cost: Family SpyKids Package from £409.00 per night (based on a two-night stay). Rates include a family room with two queen size beds, a daybed and two bathrooms. Breakfast. A St. Ermin’s Secret Agent package for each child. A local London Spy Walk challenge. Contact the hotel directly for the best available rates. 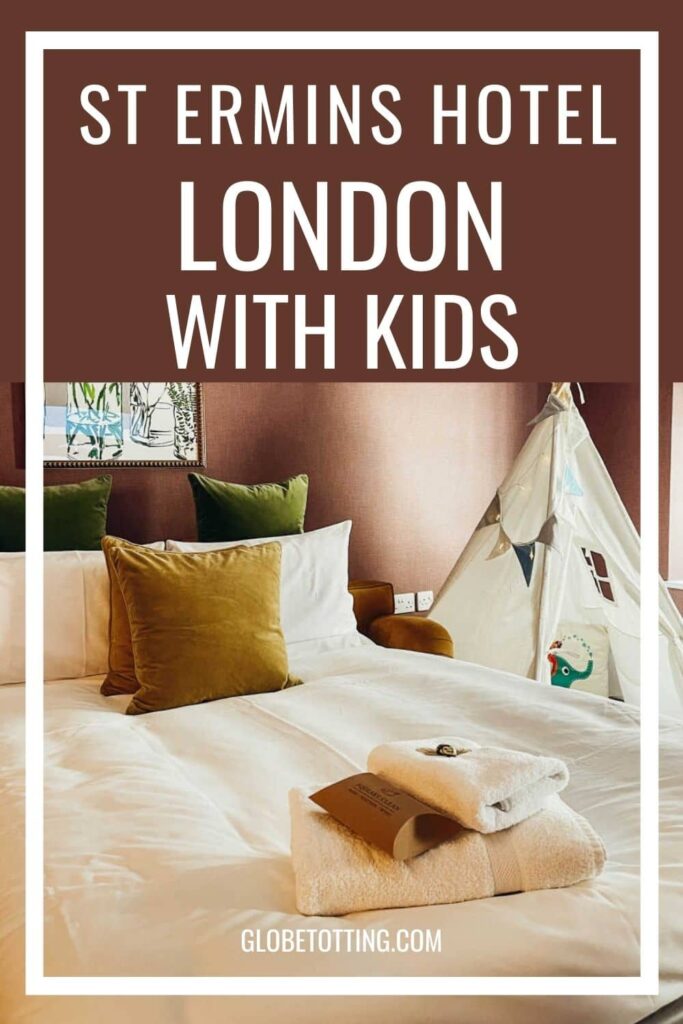