Victoria might be best known for being one of London’s biggest and best transport hubs but in recent years it’s had something of a makeover, an incredible £2.2billion makeover.

Located in the borough of Westminster, London Victoria has seen a surge in modern developments in recent years with new residential, retail and office space springing up in the neighbourhood. This development has resulted in lots of new restaurants and bars including the Market Hall, a food court housed in what was once the infamous Pacha night club.

Pockets of tradition still remain and the neighbourhood is home to some great theatres and, of course, Buckingham Palace is nearby.

Here’s our pick of the best things to do near Victoria station in central London.

You may also enjoy these London posts:

Top of the list of things to do in Victoria is to pay a visit to Buckingham Palace, the most famous of the UK’s Royal palaces. The palace has served as the official London residence of Britain’s Kings and Queens since 1837 and is still a working royal palace. It’s also one of the most popular tourist attractions in London.

The Palace is home to 775 rooms including 19 state rooms, 52 Royal and guest bedrooms, 188 staff bedrooms, 92 offices and 78 bathrooms. You can tour part of the palace for 10 weeks during summer months (22 July – 2 October 2022) and on selected dates during winter and summer. Sign up for updates.

The tours are not cheap (£30 / adult, £16.50 / child under 17yrs) although family tickets are available. We have done the tour, however, and personally I thought it was well worth it and the best option for actually going inside the Palace. When else are you going to get to visit a working palace? Visits operate on a timed admission system and booking is essential.

Changing of the Guard

Few London attractions can compete with the pomp and ceremony of the Changing of the Guard. Held outside Buckingham Palace, this event is one of the most popular activities for kids in London and sees the Old Guard at the palace switches duty with the New Guard.

The event, which is free to watch, takes place from 10.45am and last around 45 minutes; the actual handover between guards takes place at 11am. The ceremony currently takes place on Mondays, Wednesday, Fridays and Sundays but make sure to check the ceremony schedule before heading out.

Take a look at this post for more ideas on free things to do in London.

Horse Guards Parade is the ceremonial parade ground in St James’s Park. This is where the Trooping the Colour takes place on the Queen’s official birthday in June. Horse Guards the building is the one with a clock tower over an archway. This is actually the official entrance to St James’s and Buckingham Palace.

Horse Guards is guarded by two mounted cavalry troops who are posted outside from 10am to 4pm daily. The Life Guard change takes place here at 11:00am daily and 10:00am on Sundays.

Next door to Horse Guards is No. 10 Downing Street, the official residence of the Prime Minister and one of the most famous streets in London.

Located just outside Victoria Station is a miniature version of one of London’s most famous landmarks. ‘Little Ben’ sits just 15 minutes walk away from its counterpart Big Ben, which sits atop the Houses of Parliament. It has been helping commuters tell the time since it was first erected in 1892 (by the time passengers hurrying to catch a train had arrived in Victoria, Big Ben was out of sight). It’s not quite so reliable today, however, the clock sticks to British Summer Time.

To call the Royal Mews a garage would be wrong but essentially this is what it is, the place where the Royal Family keep their state vehicles, including horse-drawn carriages and cars. It’s also where the royal horses live.

It’s a really interesting place to visit and where you can see the Gold State Coach, which has been used for every coronation since 1821. Also on display are miniature carriages that were designed to be pulled by animals including goats, sheep and dogs.

Non-animal powered vehicles on show including the Rolls Royce Phantom VI, which transported Kate Middleton to Westminster Abbey for her marriage to Prince William.

For a Royal experience that’s a little more down to earth head to the Regency Cafe, which first opened in 1946. The Art Deco-style cafe has been featured in a number of BBC series and films including Judge John Deed and Matthew Vaughn’s Layer Cake starring Daniel Craig.

But it’s not just the interior design that you come for, this is one of the best places in London for a proper English breakfast. If you’re too late for a fry up then the cafe is also. open for lunch and dinner serving such traditional dishes as steak and kidney pudding, homemade steak pie and sausage, egg and chips.

Not to be confused with Westminster Abbey, Westminster Cathedral is just a short walk away from Victoria Station. It’s a beautiful building and while the Neo-Byzantine stylings might be lost of kids, it’s definitely worth a quick look if you have time. The cathedral is open to visitors and free to visit with regular choral events held here.

The two main theatres in Victoria are the Victoria Palace Theatre and the Apollo Victoria Theatre.

Hamilton The Musical is currently playing at the Victoria Palace Theatre, which underwent major refurbishment not so long ago. If you haven’t seen Hamilton yet, then I highly recommend booking tickets.

‘Wicked’, another hit musical, is playing at the Apollo Victoria Theatre and is a particularly great show for kids.

One of the best places to visit near Victoria, especially if you have young children, is St James’s Park. Personally, this is one of my favourite of London’s Royal Parks and is true oasis in the heart of the city.

The park is home to 57 acres including lakes and ponds – make sure to visit the Pelicans while you are here.

Pelicans were first introduced here in 1664 when a Russian ambassador gifted them to King Charles II. They were joined by several more Eastern White pelicans in 2013 as a gift from the city of Prague. You can see them being fed every day between 2.30pm and 3pm at the eastern end of the park’s lake.

There are lots of playgrounds in London and, not surprisingly, there’s one in St James’s Park too. Located in the southwestern corner of the park, with views of Buckingham Palace, there’s a sandpit to play in, rope bridges, slides and more.

Located in what was once Pacha, one of London’s most famous nightclubs, the Market Hall Victoria food court is a great place to visit and a popular spot in the revamped Victoria neighbourhood..

The food hall is home to eleven food stalls, three bars and a coffee shop spread over three floors and with plenty of dining space. There’s also a fabulous roof terrace that offers the best views over Victoria Station.

On Sundays the Market Hall runs ‘Family Fundays’ with morning screenings of family favourite movies from 10am, arts & craft activities and kid-friendly dining.

If you have an Instagram-loving teen or tween in your family then make a beeline for Peggy Porschen. This pretty in pink cafe / bakery is one of the most photographed cafes in London thanks to its bubblegum pink exterior decorated with oodles of faux florals.

The good news is that the cupcakes, cookies and layer cakes are very good and worth dealing with the crowds for.

If you feel like catching a film then the Curzon Victoria is a great way to do it. This swish cinema, part of the Curzon group, has five screens and very comfy cinema seats. Check the website to see what’s on.

Another hot spot for foodies big and small is Eccleston Yards, a former industrial setting whose warehouses have been transformed into cafes, bars, gyms and shops. Starting again in Spring this year is Eccleston Yards Market with stalls selling handcrafted homewares, baked goods, ice cream, accessories, and more by independent artisanal businesses. 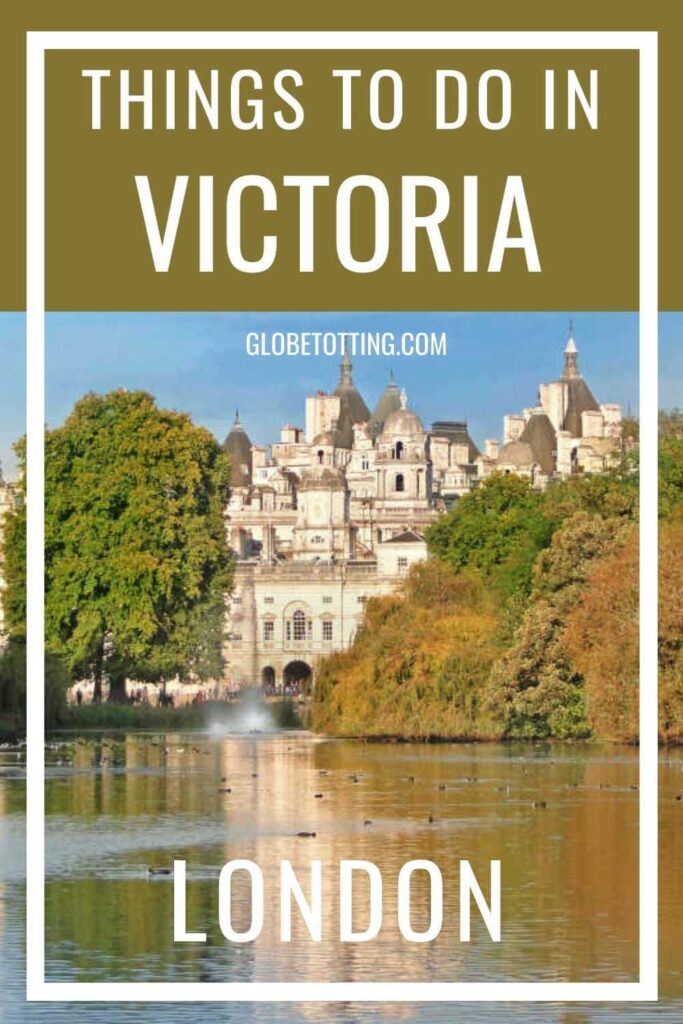