Trekking in Nepal with kids might not seem like an obvious family holiday (particularly if your kids struggle with a Sunday afternoon walk!) but we visited Nepal when  my kids were then aged four- and two-years-old and it remains one of our best family holidays. We chose to visit Nepal with a company that specialises in family-friendly trekking in the lower Annapurna foothills and it was a great option – everything was organised for us and all we had to do was walk and enjoy the spellbinding scenery.

Trekking in Nepal with kids

I first visited Nepal when I was 19 and on my GAP year between school and university. Then, I had the luxury of time and I spent four months travelling the country doing volunteer work and amassing a ridiculous collection of Yak wool jumpers and dubious stripy trousers. I have always wanted to return (for the mountains, not the fashion) and I finally had the chance in March taking my two children and my parents with me. Unfortunately, we didn’t have quite as much time to spare as a teenage backpacker so we opted for a seven night / eight day trek through the picturesque lower foothills of the Annapurnas instead.

Unlike my first experience trekking in Nepal where I carried my own backpack (and scoffed at those who didn’t!) this time we had an incredible team of porters to look after us who carried everything – even the kids when they were tired! Going uphill we walked along the more popular trekking routes, making way for the donkey caravans as we walked slowly up hundreds of stone steps. At night we slept in comfortable lodges, some positioned on the outskirts of villages and others located right in centre – all with magical mountain views. On our way down we chose the paths less travelled and wound our way through tranquil rural hamlets, vibrant rhododendron forests and past small mountainside schools filled with smiling rosy-cheeked children.

The days were long; we usually set off after an early breakfast and walked for a couple of hours before pausing for lunch. We then walked another four or so hours before reaching our next bed for the night. But the great thing is that you can take the trek at your own pace and stop whenever you want. We finished our trek tired but delighted – it was truly one of the best holidays we’ve ever had.

Some of my favourite memories include seeing my son Alfie walk almost the entire length of the trek. Where the paths were particularly steep and long he was carried in a traditional Nepalese porter’s basket that had been transformed into a fantastic kiddie carrier. But at all other times he walked – aided in part by the promise of sweets around the next corner, singing and lots and lots of stories! Shivy, the ever-smiling porter who carried my daughter Tess, was simply wonderful and the two of them formed a real bond. He would sing Nepalese folk songs to her and in return she would shout out every time she saw a buffalo (we saw a lot of buffalo). And finally, spending that kind of time with my parents – and for them to have that experience with their grandkids – was truly a once in a lifetime experience.

1. Be prepared for the steps. There are hundreds and hundreds (and hundreds!) of stone steps to walk up and down and they can be steep in places.

2. Spend a couple of nights in Pokhara at the end of the trek; this lakeside town is one of Nepal’s prettiest and the ideal place to rest weary legs. This post has more ideas on things to do in Pokhara. You should also factor in some time in Kathmandu.

3. Remember to bring warm clothes. It sounds obvious, but it gets very chilly as soon as the sun sets. We brought snacks and sweets, which encouraged everyone to keep walking. An iPad in the evening became a fantastic distraction for the kids who tended to eat earlier and then watch a movie while we had dinner. 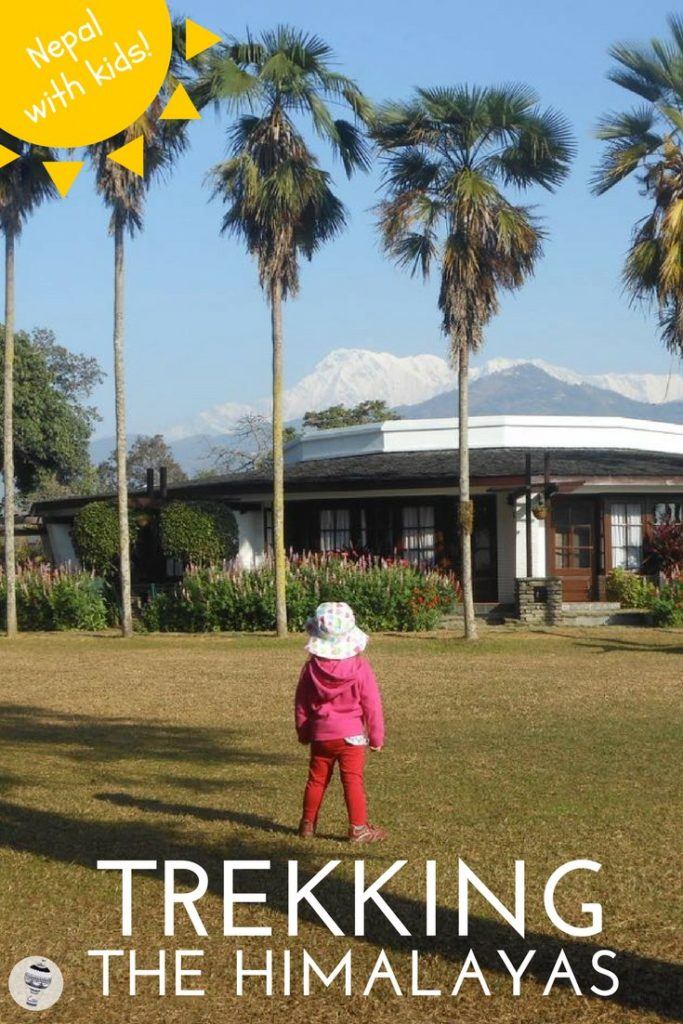 24 thoughts on “Trekking in Nepal with Kids”